The next morning we took the long drive (since the gap road was impassable due to rain) up to Maple Creek and back down to Fort Walsh. The road was fairly good with the exception of the last wild switch back section in to the Fort. The cattle also seemed to want to enter the Fort but the Texas Gate was keeping them out 🙂 This was once the North West Mounted Police (NWMP) headquarters back in the 1870’s. We had a period costumed student tour us through the buildings of the fort including the Jail. On the way out we stopped at the Cyprus Hills Winery and sampled all their fruit wine products, Sharon liked the Rhubarb and I liked the Saskatoon Berry. They also had a cool concept where you could shop in their mini store and get fresh baguettes, cheese, meat, Saskatoon Berry Tarts, and of course a glass of wine for lunch. The setting was idyllic! Of course we had to buy a few bottles. 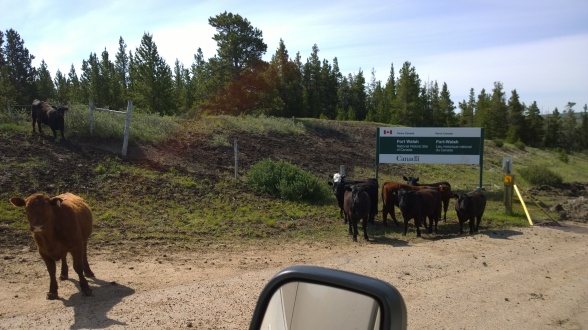 Our total travel (and stop) time to get to Writing-on-Stone Provincial Park in Alberta was 9 hours. We arrived just before John and Saskia and got our sites set up for our two day stay. The area was really magical with the Hoodoo formations all around us and our sites were right along the Milk River. John had a great propane fire pit so we enjoyed a few wee drams by the fire. 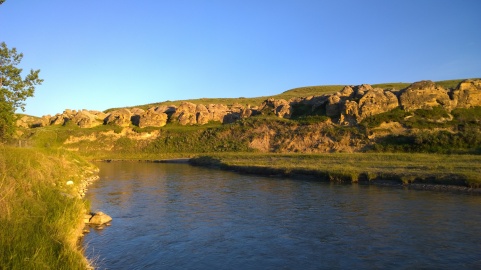 The next day we started with the Hoodoo trail hike that took us through the formations and saw several Pictographs which are rock paintings done by the Blackfoot tribes using red ochre. My blood pressure went through the roof when a Prairie Rattlesnake was on the trail in front of me! He quickly scurried in to the bushes as he was scared of us as well. In the afternoon we took a guided hike with a park ranger and she took us in to a closed archeological area where we saw many Petroglyphs which are carvings done by the Blackfoot in the rocks and some date back 100’s of years. We saw a very large Bull Snake but at least he wasn’t poisonous but then we saw another Rattlesnake and even heard the rattle. The ranger said she hadn’t seen a Rattlesnake in 3 years so I guess it was our lucky day to see two!! This park was really worth the visit. 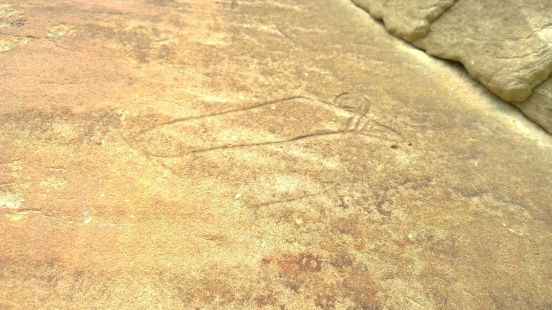 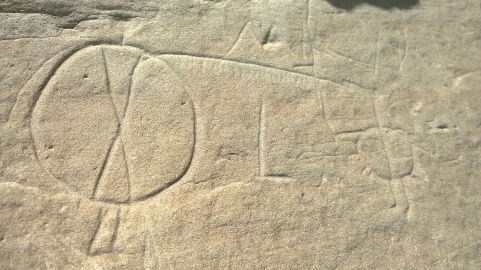 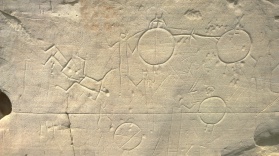 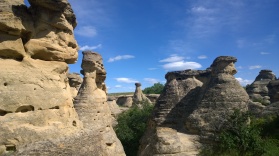 Next stop was Waterton Lakes National Park but on the way we saw a sign for Whiskey Gap so we had to stop for lunch. We also went to Cardston where they have the Remington Carriage Museum. They had 305 carriages in their collection but it all started from a rancher named Remington who asked the government to take over his collection and setup the museum so it would stay together as a collection. We were blown away by how many different types of carriages there were and the detail they went through to restore them. One carriage that was owned by the Vanderbilt family was worth $750K! Saskia really wanted to go for a carriage ride so John and Sharon went along for a ride down by the river and around the grounds. 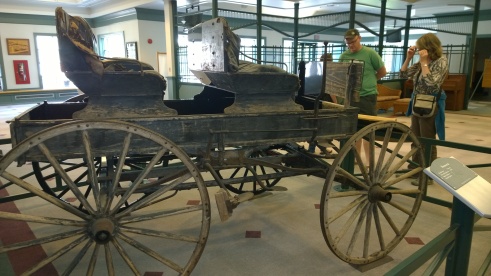 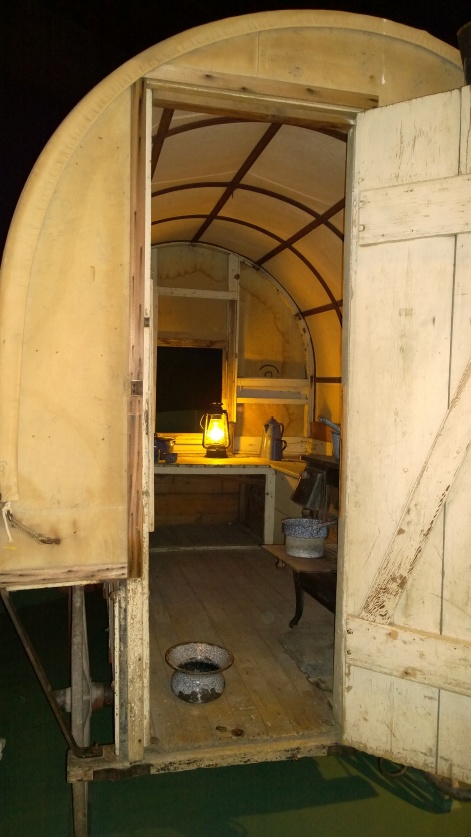 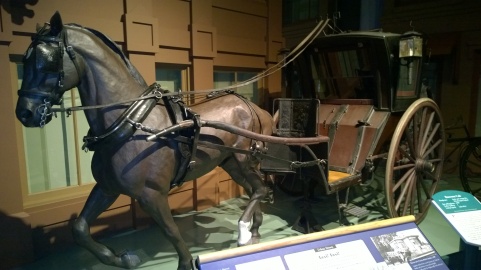 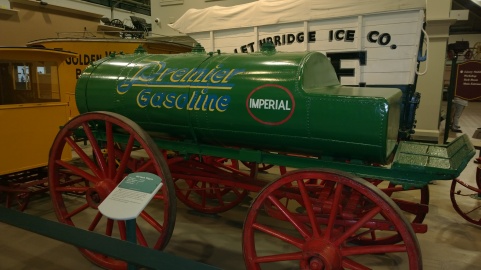 We arrived in Waterton Lakes National Park (a UNESCO World Heritage Site) and it was so dramatic how the prairies changed almost instantly in to the mountains. The park is adjacent to Glacier National Park in Montana and together they form the first International Peace Park. There was a water fall close to our townsite campground called Cameron Falls and the 90 year old Prince of Wales hotel had a beautiful view of Upper Waterton Lake. We had planned to do the lake boat cruise but it turned out really special because the Food Festival was on and John had booked us on the Pie Cruise. All you could eat pies of all different types while you cruised along the shores of the lake. Thea won the prize for sampling the most pies – I think it was 6. We even went across the border in the middle of the lake to the Montana side of the lake. We also saw cool rock formations along the cliffs that went right in to the water. At the end we saw the 89 year cruise boat they use in the peak summer season and the Prince of Wales in the background behind it. Later we celebrated early for Saskia’s birthday. 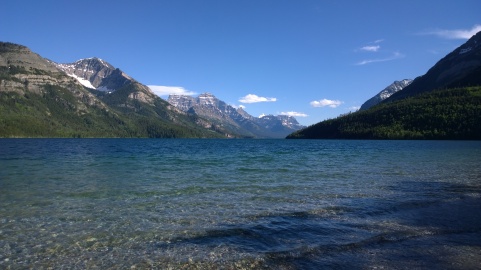 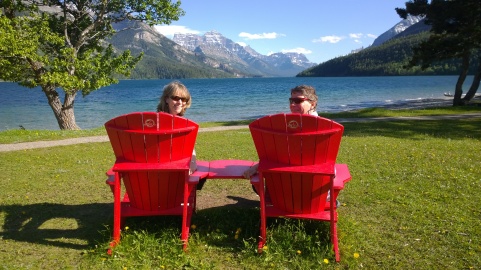 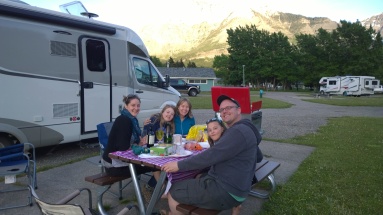 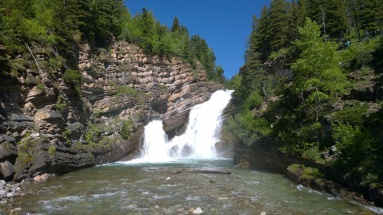 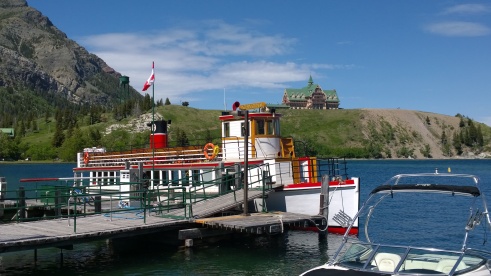 Sunday we decided to do an 8 KM interpretative hike with Ranger Sierra on the Horseshoe Basin trail (after a little adventure on the Bison Paddock Loop). The views were spectacular although the 400 M elevation climb was quite hot. Sierra gave us lots of facts about the plants and animals along the way so it was very enjoyable. We even saw the Alberta Wild Rose Flower right beside the Ontario Trillium flower which was very appropriate for our family group;-) The next excitement was seeing a Cinnamon coloured Black Bear heading directly for us on the trail ahead (hard to see in the shot). We made lots of noise and he scampered off away from where we were going to walk. I saw some cool fossils in the creek and they were aragonites from over a billion years ago! We had lunch at a very pretty location by the creek and then did our return hike. John and Saskia headed back to Calgary and Christine and Thea gave us a ride back to the campground and we saw a moose along the way. It was so nice here we decided to stay one more day and then we will head in to Montana. 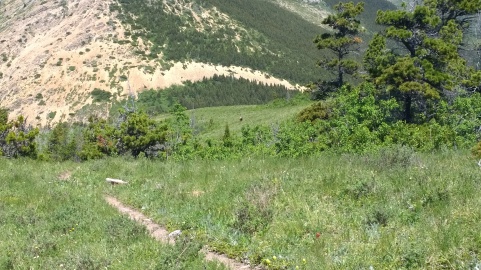