We drove about 560 KM and decided to stop in Bozeman before going in to Yellowstone. The RV park we picked was great and had Laundry for $1.25 (which we really needed to do) and they had loner movies so we watched “The Imitation Game”. They also had Wi-Fi so we were able to book a no services campsite in Bridge Bay Campground (Yellowstone NP) for 2 nights (which we extended to 3 nights). On the way in the North Entrance the next day, we saw the North Range and then stopped in Mammoth Hot Springs to see the Visitor Centre and the Terraces. They reminded us of Rotorua New Zealand and Pamukkale Turkey;-) The Elk had really made themselves at home by the administrative offices. Next we experienced traffic jams Yellowstone style with the Bison blocking the road in the Lamar Valley. Then we saw Tower Fall valley before heading to the campground. 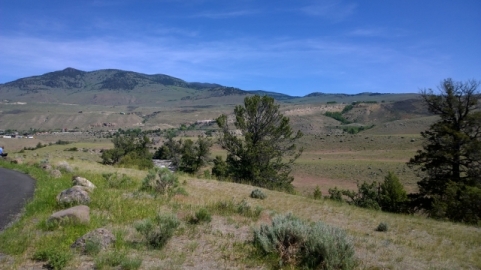 On Saturday we got up early to start our Yellowstone circuit tour. The first stop was the West Thumb Geyser Basin and it was really cool to see 2 Elk feeding around the geysers. Next we headed for the Old Faithful Geyser area and crossed the Continental Divide twice on the way (great test of the RV engine and brakes!). Even though it’s only June there were thousands of people at Old Faithful. They post the estimated time for the next geyser action so we went to the visitor centre to read the info. We knew the time must be getting close when we realized we were the only 2 people in the whole centre. However we didn’t miss the Geyser as it was later than predicted. Due to recent earthquakes it only goes off every 1.5 hours or so. After we saw it blow we started walking around the rest of the geysers and quite frankly the other ones are far more interesting than Old Faithful, especially Grand Geyser which we just happened by when it blew and you were far closer to it than Old Faithful. The blue colour in some of the pools was phenomenal! 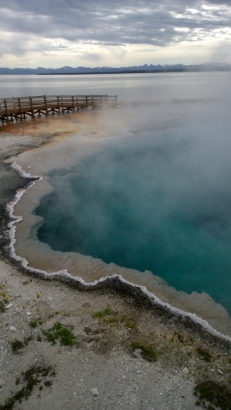 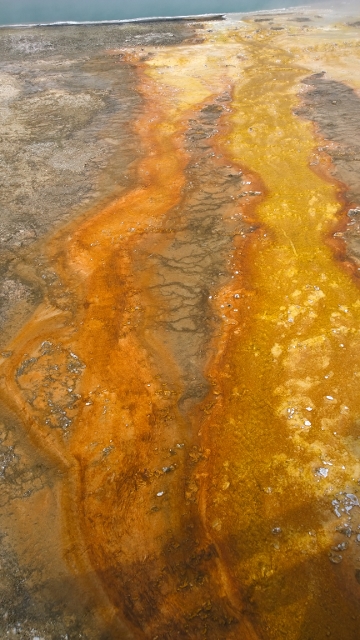 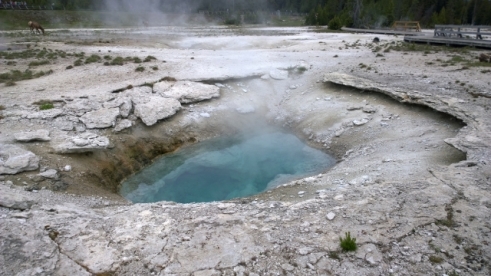 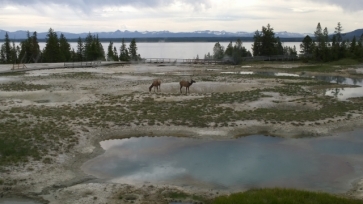 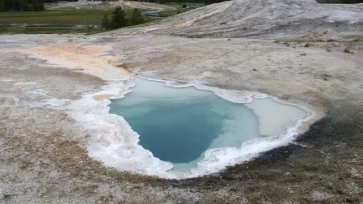 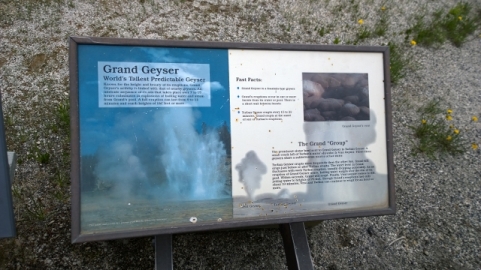 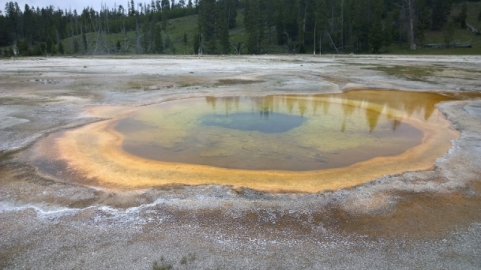 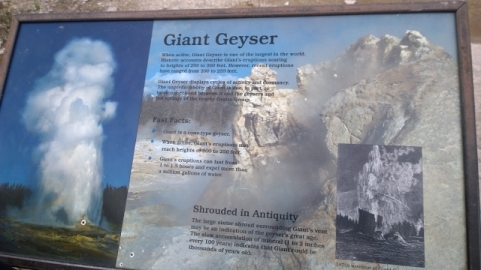 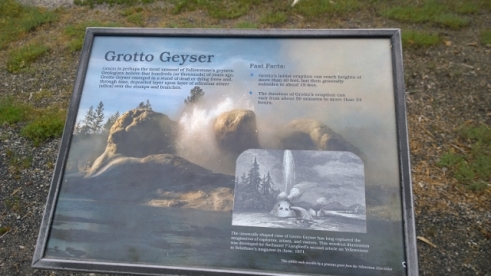 The next part of our day was very unplanned. We were driving toward Norris and the Check Diesel Exhaust Fluid message came up on our dash! We pulled over and read the manual but it was giving us conflicting warnings. Later we realized we needed to add DEF and luckily we had bought some before we left so we could partially fill the DEF tank so we could get out of the park to buy some more. Next we had a 2 hour Bison jam! An entire heard of Bison decided to leave one meadow area and travel up the road about 10 KMS! Needless to say this caused a huge traffic jam. The ranger had told us it would only be a couple of miles but it turned out to be much further and much longer. By the time our vehicle reached the other meadow there were only 4 Bison of the herd on the road and we felt sorry for the one big male as he was hobbling along trying to catch up with the herd which was already in the field. We had planned to see the Grand Canyon of Yellowstone but now we were out of time and it had started to rain so we checked and we could stay in our site one more night so we planned to do the Grand Canyon on Sunday.

First thing Sunday morning we visited the Mud Volcano area and this time we found 2 Bison enjoying the heat from the thermal area (it was cold overnight and we had our furnace on). We also saw the Sulphur Caldron and a large male Elk right by the road. Most tourists seem to drive the South and North Rim roads of the Grand Canyon of Yellowstone and just stop at each parking area but we decided to hike the entire South and North Rim Trails and what a great decision. It got us away from the crowds and quite frankly gave better views than just the selected spots where there were so many people you could barely get to the front to get a photo. We liked the South Rim trail the best but it also depends on what time of day you go and the light conditions. We saw some trees with their bark stripped and the ranger told us it was the Bison rubbing their backs. It was very special to see 2 Osprey flying over our heads and calling out to protect their young (later we also saw the nest). There were several water falls to see along the canyon and we even saw snow but the coolest thing was all the different colours along the cliffs. It’s really hard to portray the grandeur with photos but here are some of our favourite shots. 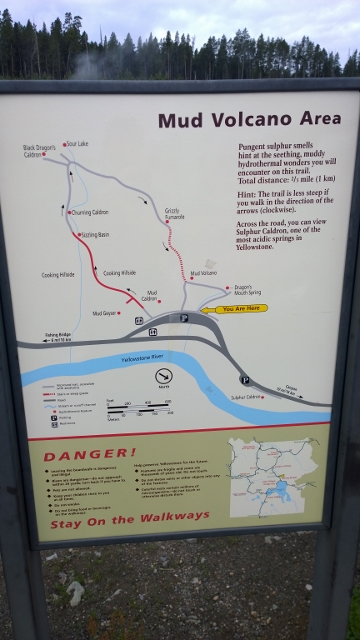 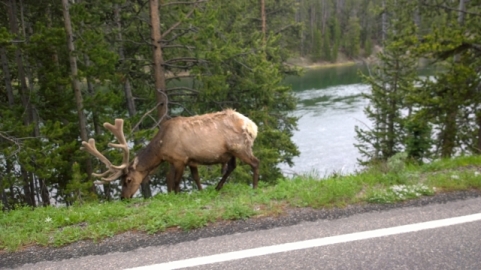 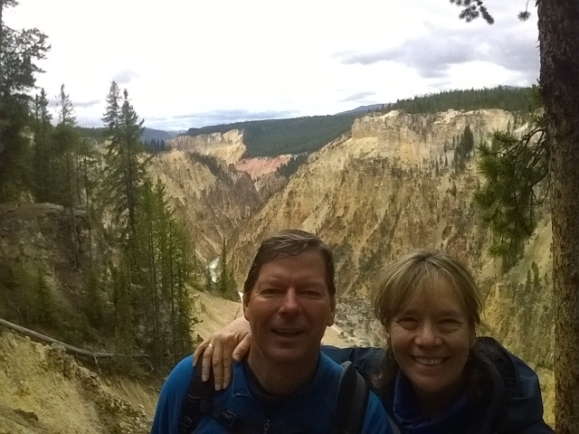 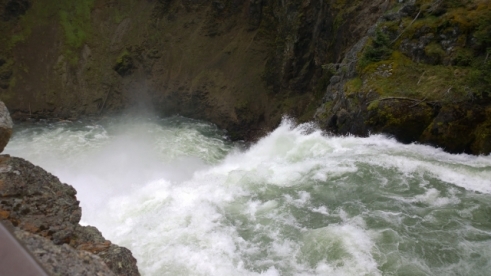 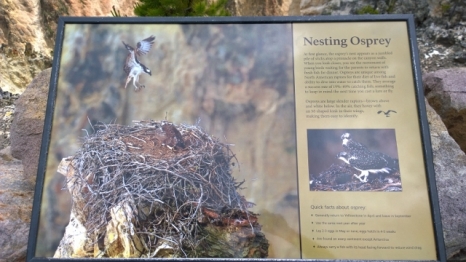 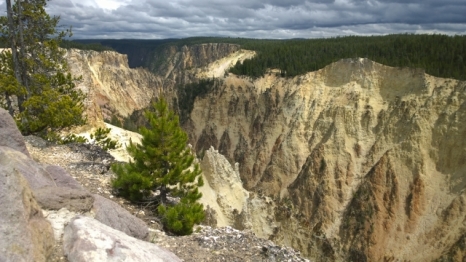 Yellowstone was very special although I’m not sure I would want to be there in July or August;-)