After we left Alabama we found out that Elvis (who was born in Tupelo Mississippi) was alive and well in the Mississippi Visitor Centre and he was even dressed up for Mardi Gras;-) Next stop was the Grand Bay Coastal Resources Centre where they had a small display area to explain about the coastal areas (Open Water, Seagrass Beds, Salt Marshes, Wet Pine Savannas, Maritime Forests, and Freshwater Swamps). They had examples of the SWMP (System-Wide Monitoring Program) stations that are used to gather data on changes to the estuarine conditions (water quality, meteorological, nutrients). They also had some information on climate change and global warming that perhaps Mr. Trump should read about. This centre was fairly new so they were just building some trails to hike. We walked on the open portions and drove down to the boat ramp to see the swamp area. 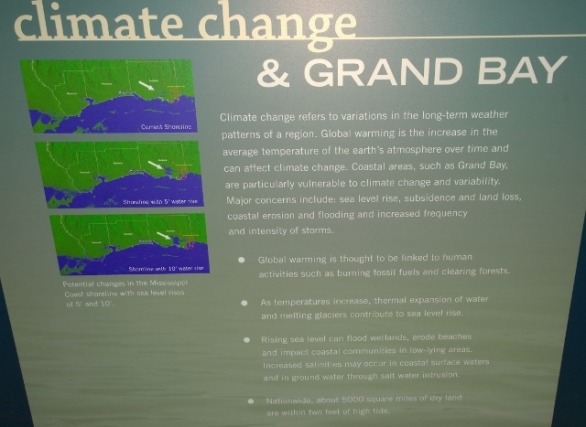 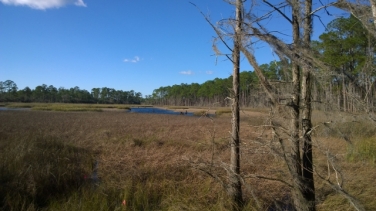 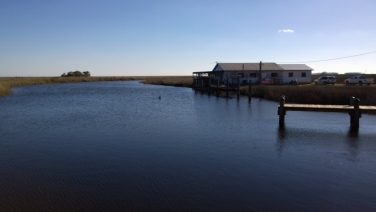 We spent 3 nights in the Gulf Islands National Seashore Davis Bayou NP campground. It was a very small campground (51 sites) and was full so it was good we had booked ahead. On the first day in the park we rode all the trails, visited the boat ramps (loved the sign “Swimming Reserved For Alligators) and the visitor centre and heard a ranger talk on Alligators. The visitor centre had interesting information about the Bayou area, the Gulf of Mexico, and how the Islands in the National Seashore were gradually moving west as the sand was shifted. On the next day we hiked the various trails and got our internet/email fix in the visitor centre. We saw Red Bellied Slide turtles, Blue Heron, Great Herons, Snowy Egrets, several sizes of Alligators including an 8.5’ adult, an Alligator Turtle, and a frog. On the last day we did a guided ranger nature walk and also saw an Osprey. One of the cool facts the ranger gave was that the cordgrass in the Bayou has roots that go down from 14’ to 40’ deep so they can survive any storm surges. Lots of wild life to see in this park and it seems out of place as the park is surrounded on 3 sides by the city of Ocean Springs. The last shot shows the latest selection of beers and my favourite was the Judge Roy Bean Coffee Stout made in Fairhope Alabama. 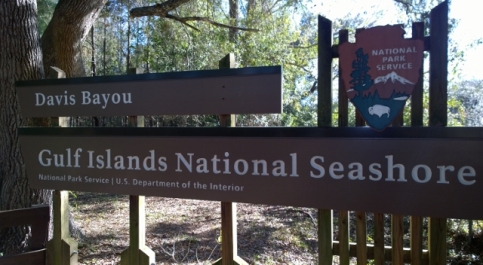 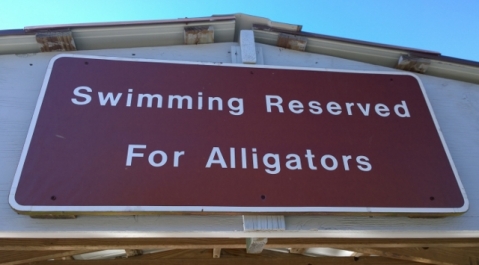 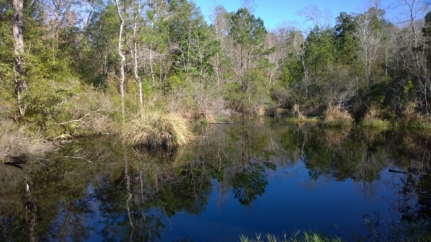 Mom warming up – She barely moved all day

When we left Davis Bayou we stopped in Biloxi (pronounced Buh Luck See) at the Palace Casino (based on Ross’s suggestion) to have the buffet lunch. What an amazing spread! After two full plates of seafood, meat, and Jalapeno biscuits (with a little bit of vegetables) we had a large assortment of desserts! We had to sign up for a players card to get a discount on lunch and they put $5 of value to start you off on the card. After a little guidance from other slot machine players Sharon actually won $11.60 which paid for her lunch!! Next we went to the Biloxi visitor centre and they had markings on the flag pole to show where the water surge level got up to during Hurricane Katrina in 2005. The visitor centre was completely rebuilt and now the buildings have to be at least 13’ above sea level. Inside they had their decorated Mardi Gras tree as well as some of the king and queen costumes. The 3 core colours are purple for justice, green for faith, and gold for power. We watched a 50 minute program on Katrina and the devastation was unbelievable especially from the storm surge. In the museum area they had several wood carvings that had been done from some of the large Live Oak trees that had been destroyed in the hurricane. The museum also showed some of the famous people from this area including Jimmy Buffett. In front of the visitor centre was the lighthouse from 1844. When we arrived in our campsite at Buccaneer State Park we had a lovely sunset in front of our RV. 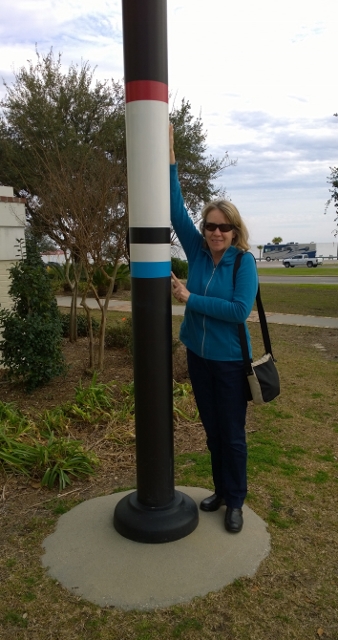 On the first morning in Buccaneer SP we decided to do laundry since the machines weren’t busy and they were a little less expensive than other parks. After that we went for an MTB ride on the muddy nature trail to see the Bayou and we saw a small version of a murmuration (spelling?) of birds. After that we started to ride along the Gulf coast bike path through Waveland and on to Bay St. Louis. We saw some of the newer homes that been rebuilt after the hurricanes and also some brick piles and ruins from homes that were never rebuilt. After hurricane Katrina 60% of the homes in Bay St. Louis and 90% of the homes in Waveland were destroyed! 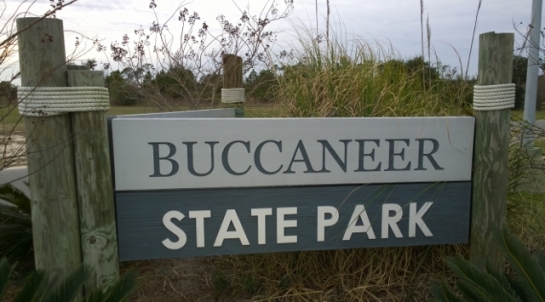 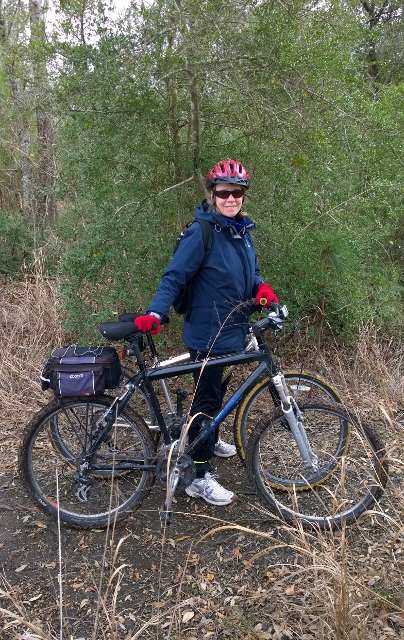 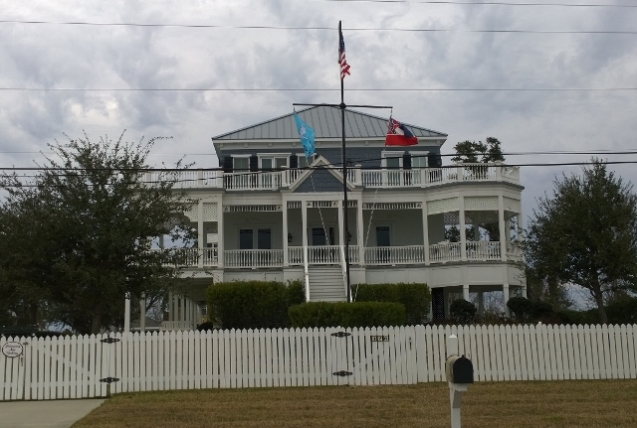 Built on stilts for storm surge 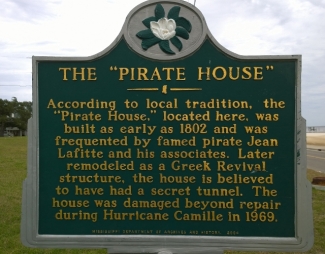 All that’s left is the stak of bricks

When we reached Bay St. Louis we saw several of the Live Oak trees that had not survived Katrina and chainsaw artists had carved them in to angels and various animals. One had a sign about how the tree had been used for survival. Some of the larger Live Oak trees that had survived Katrina are now actually registered with the historical society. We also saw the Hancock Bank established in 1899 and the train station (Margi Gras Museum inside but was closed when we got there) where they had butterfly and fish artwork in the park. We ended up riding about 25 KMS in total to see the nature trail and go to Bay St. Louis return. 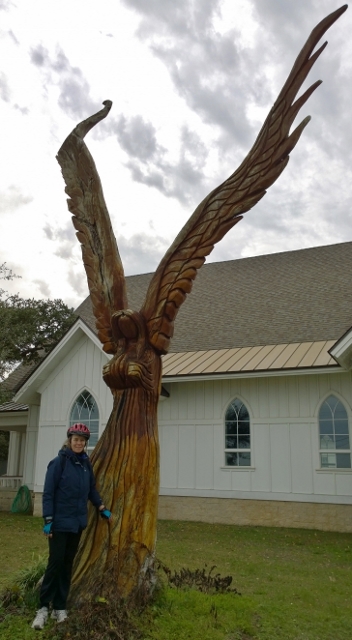 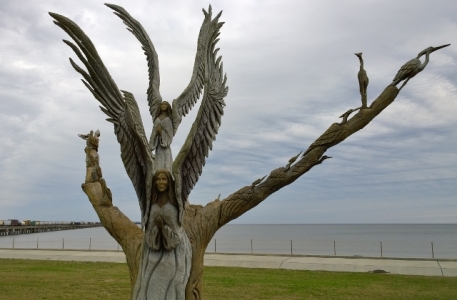 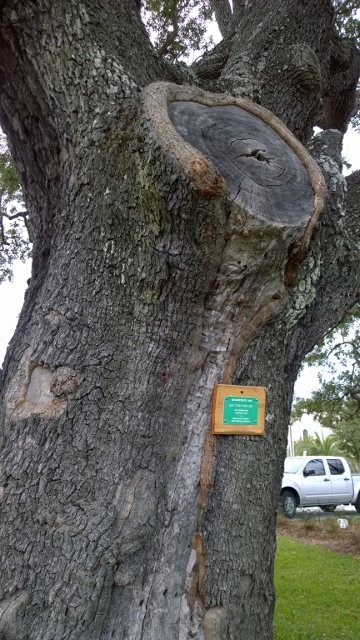 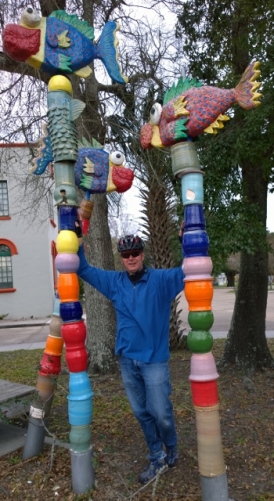 Not far from Buccaneer SP was the Infinity Science Centre and John C. Stennis Space Centre (2nd largest NASA site, Kennedy Space Centre being the largest) so we decided to make that a day trip. I put captions on many of the photos to make it easier to follow. We started off with a planetary presentation in a theatre where 4 projectors projected on a large sphere so it looked just like each planet. Then we went on a 40 minute bus tour of the Stennis Space Centre where the guide knew all the facts and figures for every engine that had been tested at the centre. The actual engine test platforms were absolutely enormous. They have a 120,000 acre buffer zone around the site due to the noise produced when they do test firings of engines. Back in the science centre we saw the following: the new engine platform to be used for the deep space missions, the Boeing 787 Dreamliner engine, information about hurricanes (NOAA (National Oceanic and Atmospheric Administration) has a base at the site), the history of how they turned this swamp area into the NASA site, a large area on the Space Shuttle, a replica of the destiny module of the ISS, actual ocean and lake scientific buoys, a Navy Seal boat, and the incredible F-1 Rocket engine and a new display area with the actual Saturn V engine module = INCREDIBLE. Another fantastic place to stop and get brain overload;-)

Does this make me look buff?

3 other test platforms with control bunker in front 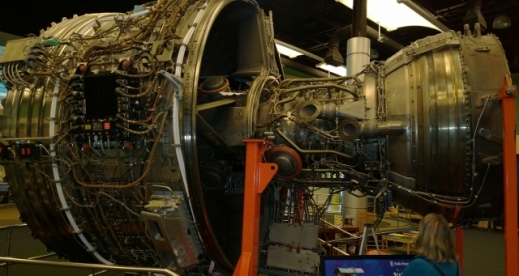 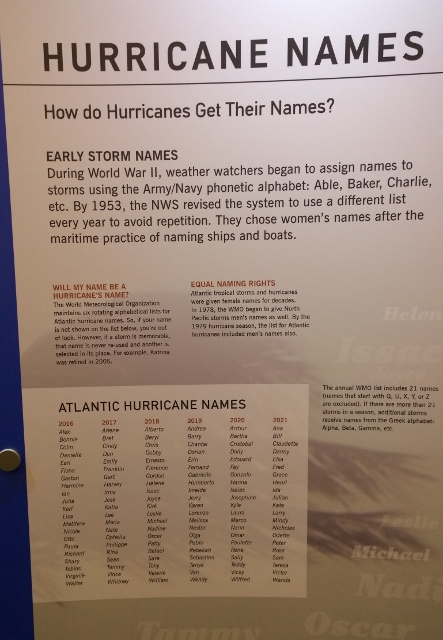 Hurricane names for the next 6 years

Who are those martians 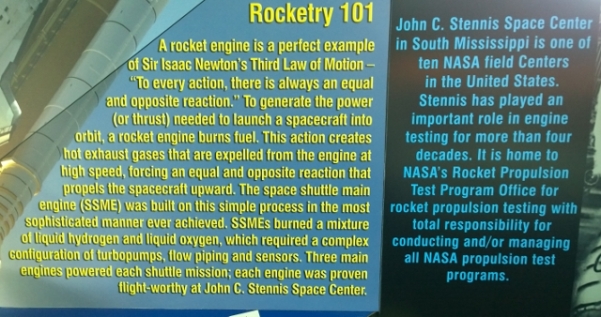 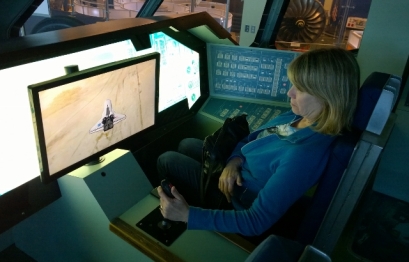 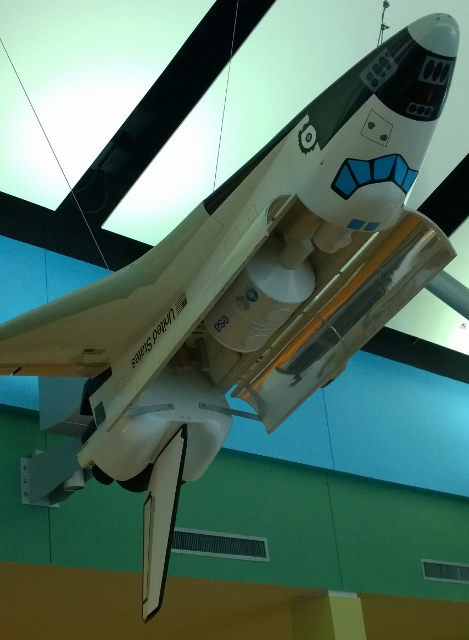 Nomad Buoy – used since 1940’s. These have food and water on them incase you a floating near one. 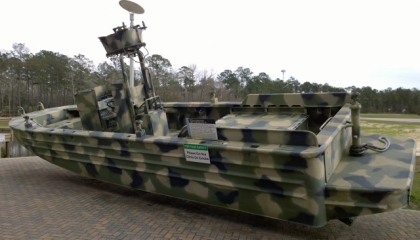 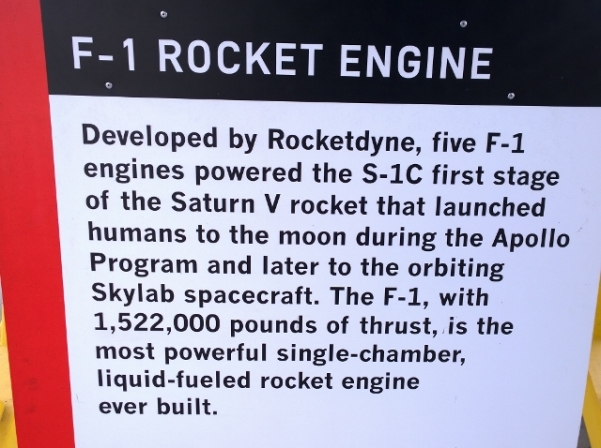 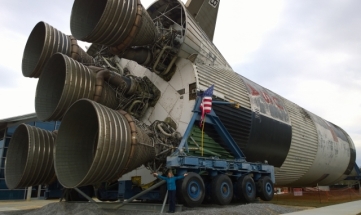 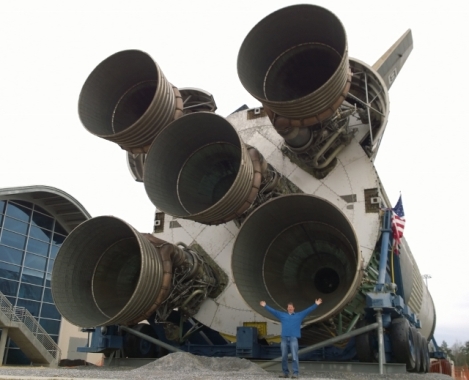 Wow these F-1 engines are huuuge 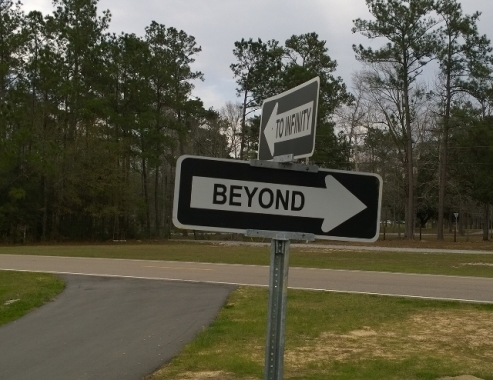 Today we hit Louisiana and New Orleans but the bad news is we just got a stone chip on our windshield, of course on the drivers side, as we drove out of Mississippi!