Before I begin this blog section I thought I would give a few general observations we’ve found after 11 weeks of travelling. Here they are in no particular order:

Those are some general observations we’ve found and now back to your regularly scheduled blog;-)

Once in Texas we thought we could camp at Sabine Pass but it was just a historical battleground so we went further west to Sea Rim State Park. It turned out they only had 13 sites and were full but the ranger said we could boondock on the beach for half price if we wanted. We drove over to check it out and we were a little nervous not knowing how high up the high tide would come but we decided to go for it and we’re so glad we did. We spent 2 days there and each day we had glorious sunrises coming out of the water and equally spectacular sunsets going down in to the water. Even Sharon got up early to take photos of the sunrises! 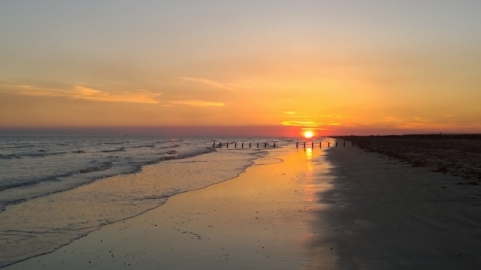 At Sea Rim we walked the beach looking for seashells (saw a massive Moon Jellyfish), saw a really green grasshopper, walked the Gambusia Nature Trail boardwalk (where an alligator blocked us from completing the loop), saw Gambusia fish (they eat mosquito larvae so we could use them back home) and blue crabs, and rode our bikes to the paddle trail area and several miles down the beach. 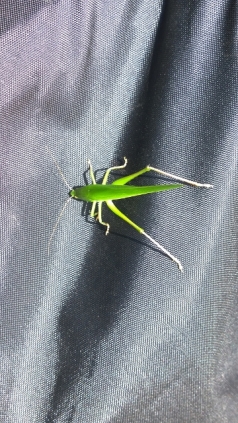 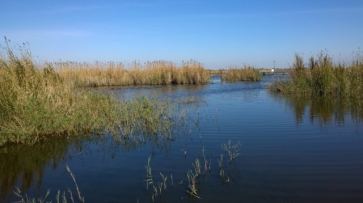 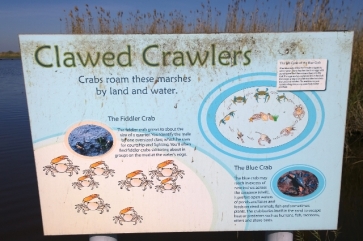 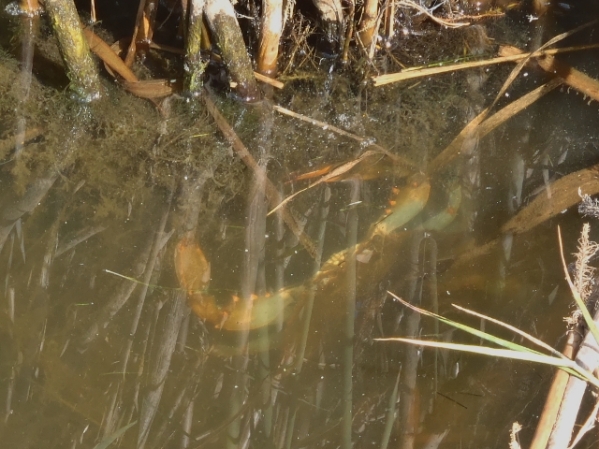 You’re not going by me!

Since we didn’t have internet access at Sea Rim we didn’t have a way to research our next place to stay. When we left the SP we stopped at the Sabine Pass Battleground and read all about the very significant civil war battle that occurred here where the small Confederate forces beat the large Union fleet due to the locational advantage (50 vs. 5000 troops).  We also saw the mounds used for the canons that protected the pass in World War II. Along the Sabine Pass we saw lots of ship activity and the rigging for servicing the ships in dry dock. 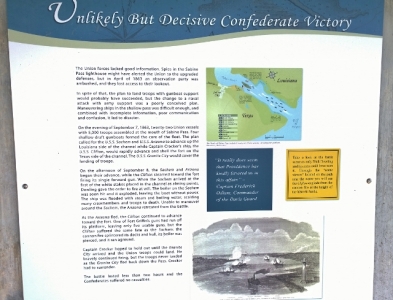 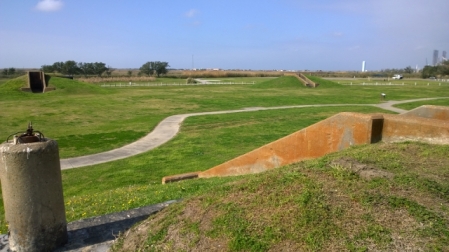 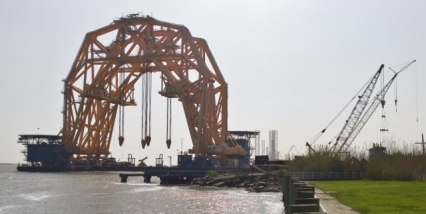 When we returned to Port Arthur we got internet access at the Visitor Bureau and realized that getting a campsite in a SP in Texas on a weekend was impossible. Consequently we decided to stay in a small RV park in High Island that had availability and good internet access. This allowed us to spend a good amount of time researching and booking the locations for the next week. When we walked down to the water in High Island we soon realized why the road from Sea Rim to High Island had been closed when a hurricane had completely destroyed the road. We also saw one of the locally made bird houses in the shape of the state of Texas.  The area is a huge birding migration route, very busy during that time of year.  I had a touch of a cold so this location also gave me some time to rest up.

Washed out Highway 87 – near High Island

We were leaving High Island on Sunday and couldn’t get in to Galveston SP that night so we decided to stay at an RV Park in Galveston for one night so we could walk to see the downtown area. We took our second ferry ride but this one was much larger and was free to go on. They had a special lane for medical pass cars due to the very large medical facilities in Galveston. It was funny at the RV park because we wanted to walk to the Ocean Star Oil rig and both the campground owner and a police officer directing traffic (for a marathon race) said “Oh no, you can’t walk there it’s much too far” and when I checked Google maps it was only 3.04 KMS!  I guess no one walks here;-)  On our walk we saw lots of historic homes and buildings in the downtown area.  Once we reached the harbour area we saw two large cruise ships, some oil rigs being serviced and the Ocean Star jack up rig which was now a museum.

Somebody needs to wash that rigs roof 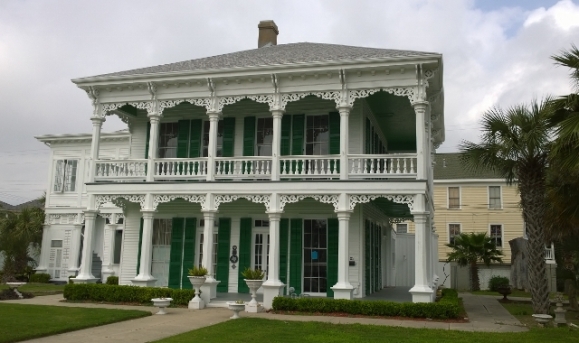 Sharon had been in the Ocean Star Oil Rig Museum during a work conference but she said many of the exhibits had been changed so it was worth going through again. The museum explains about many of the different styles of oil rigs and how the drilling and production of oil actually works. The Ocean Star itself was what they called a Jack-Up Rig which is used in more shallow conditions and they float it out to the location and then jack up the 3 legs until the rig itself is about 25’ above the water. They use lots of technology including seismic measurements to find the actual oil pockets. This rig would then be used to drill the actual shaft (up to 25,000’ down) and then they would put in the steel casing and put cement around the casing (if they have to change drill bits it can take up to 20 hours to remove all the drill pipes and then swap out the drill bit for different materials to drill through). They then use explosive charge perforations through the casing into the oil zone and then seal that section with a tube for the oil to flow up through. They use what they call a Christmas tree at the ocean floor to control the oil flow upwards. Then in turn they can either pump the oil to the surface to a storage ship or use a pipeline to send it to shore for refining. It was also cool to see that they can now drill directionally, so in other words not straight down but sideways to reach an oil pocket. I was blown away by how many pipelines they have across Texas and Louisiana so it seems odd how much push back there is for the XL pipeline from Canada. It was also very interesting to learn about the underwater rovers and the ADS (Atmospheric Diving System) suits for divers to perform functions under the rigs and around the production area. The operating rigs help to offer a location for sea life to congregate and they are also using recycled drill platform components to form new reefs. I’ve tried to caption each photo to give you info on what we saw in the museum. We really enjoyed learning about how these rigs operate. When we left the museum we saw the shrimping boats and a pair of White Pelicans (so far on the trip we’ve just seen the Brown Pelicans). Sharon started talking to the lady in the gift shop and she told us about a restaurant that locals go to named the Black Pearl in the downtown area so we went there for our early Valentine’s dinner. Sharon tried Crawfish Etouffe and I had Shrimp Diablo which was really spicy and had 15 large shrimp in it! We saw more old houses as we walked the big 3.04 KMS back to the RV park;-) 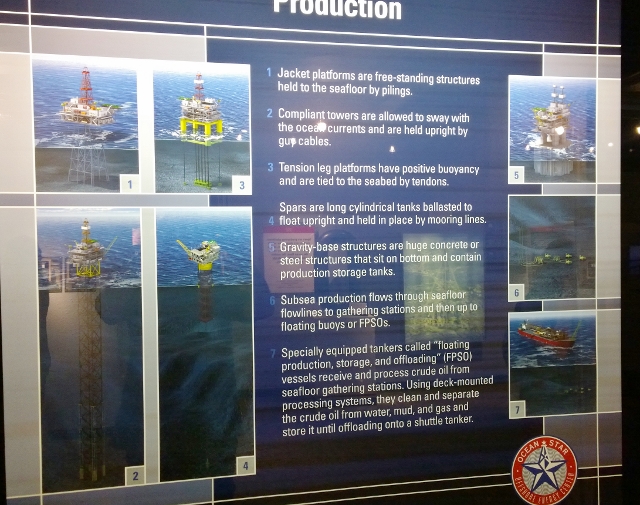 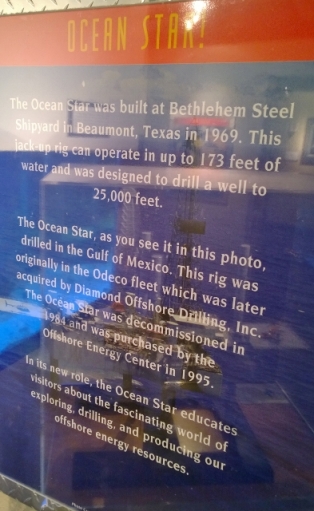 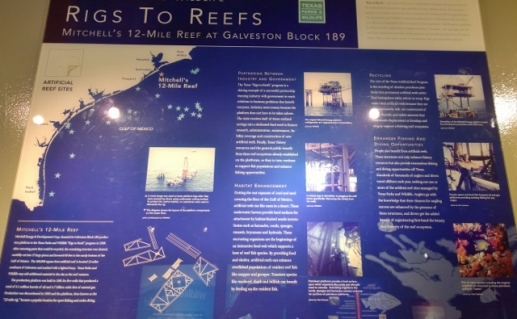 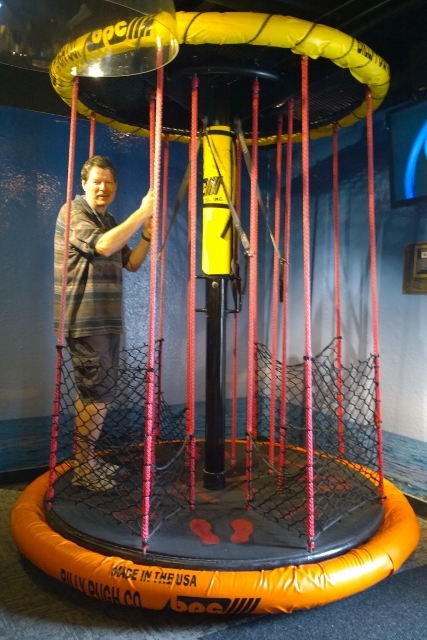 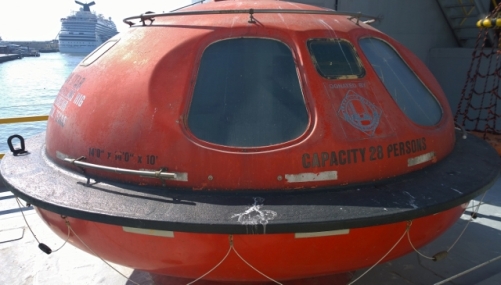 Products made with oil