When we left South Padre Island to drive to Mission Texas we went by Bobz Inside World which was an arcade and souvenir shop but we had to stop to see their massive sea life display. We went to Mission and the Bentsen Palm Village RV Resort (a very nice place to stay) so we could visit with Ross and Liz from Mallory Beach Road and we had a great time while there. The first night we had a great slow cooked rib dinner with potatoes and asparagus and loads of red wine;-) The next morning we did laundry, posted a blog, and rode over to Bentsen-Rio Grande Valley State Park which was right beside the RV resort. The State Park is one of the top birding locations in the country as it is a crossroads between tropical and temperate habitats. There are 100’s of species of birds that migrate through this area as you can see from the grid in the display area. We saw Northern Cardinals, Altamira Orioles, Plain Chachalacas, Black Vultures, and Green Jays. 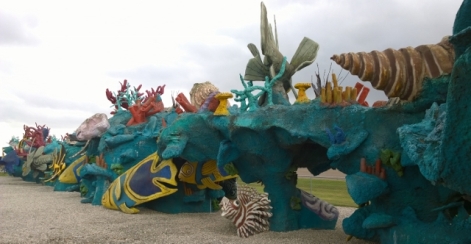 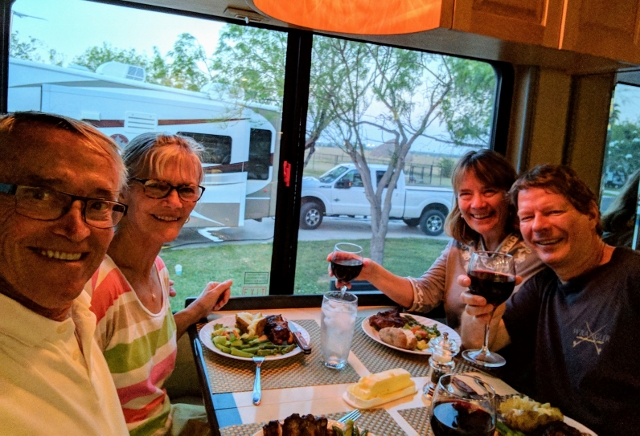 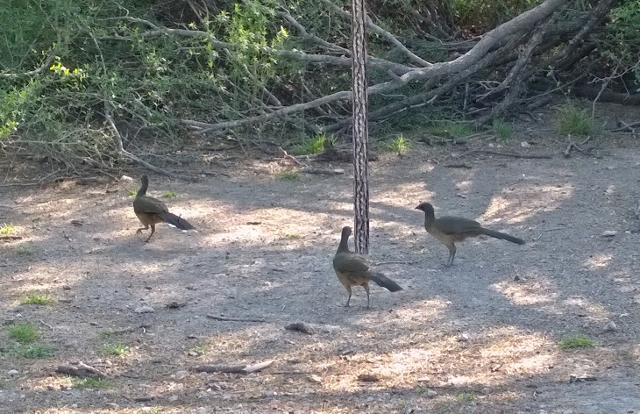 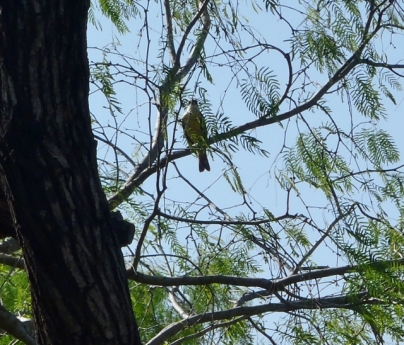 In the early 20th century the farmers cleared the area and put a system of irrigation channels in place to allow the water from the Rio Grande to flow into the fields to irrigate the crops. The land for the SP was donated in 1944 and is helping to preserve the original woodlands and brush from this area. In several locations there are Resaca’s which are oxbow lakes that are formed from silt deposits and erosion that cut off a section of the river to form the lake. We rode around the roadways of the park and then stopped to walk the 2 mile Rio Grande trail. The heat in the afternoon was unbelievable at about 99 F and we wondered if we could finish the trail. They say this trail is the only one where you can see the Rio Grande River but in fact there are no views from the trail. I found a side shoot through the bush that seemed to be going in the right direction so we tried it and luckily it did lead to the river where you can see how close Mexico really is, at least until they put the wall in the middle of the river! In order to cross the river Mexicans use inflatable rafts and then deflate them when they get to the US and we saw remnants of one raft. It was a little disconcerting because Border Patrol planes and helicopters were going overhead so we hoped they didn’t mistake us for illegals. I was parched by the time we returned to our RV so I finished off the last of my next selection of beers. My favourite here was the Cutthroat Porter from Odell Brewing Company with the Shiner Wicked Ram IPA as a close second. The least favourite was definitely the Shiner Ruby Redbird which had pink grapefruit juice used in it, even Sharon didn’t like it and she likes fruity beers. That evening we went to Liz and Ross’s for a “friendly” match of train dominos, where Sharon counted very little and Ross had to count so much he later found himself a domino counting app for his phone. 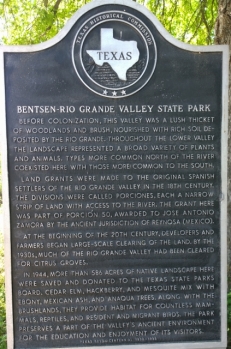 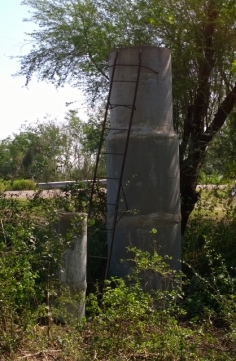 Rio Grande River – Mexico on other side

The next day we went on a shopping trip to Mission with Ross and Liz so we could visit an amazing Liquor store and of course bought lots. Then we went to the Riverside Club restaurant as it was located right on the Rio Grande River. They had tour boats leaving from there but the big action was the border patrol boats who had just completed a drug bust where 15 Mexicans had tried to swim across the river with drugs. When the boats came they confiscated 110 lbs of Marijuana and the Mexicans swam back to Mexico to get away. We had a fried feast for lunch with Corn Fritters, Shrimp, Cod and seasoned French fries with of course some Margarita’s and Dos Equis to chill the heat of the day. After lunch Ross drove us on a dirt road excursion where we saw about 20 Border Patrol cars, several State Troopers, a high end Camouflaged Hummer that had a gun turret and infra-red cameras (they wouldn’t let us take pictures), and the launch point for the Pontoon tour boat. Our timing was perfect to see 2 x 900 HP Texas Highway Patrol boats go bombing by us as well. That afternoon we borrowed Ross’s Dyson V8 vacuum so we could do a much needed clean of the inside of the RV and I went on the roof to clean the vents and skylights. The next day we said goodbye to Ross, Liz and Bella after our fantastic visit with them. Our rig looks much bigger when it’s in the foreground of the photo;-) 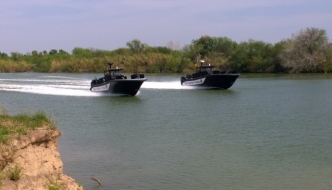 Our next stop was just 1.5 hours NW along the border called Falcon SP where we had to stop since it was on Falcon Lake (Sharon’s family have a cottage on Falcon Lake Manitoba). We had our Mesquite Smoked Pork Tenderloin surrounded by Mesquite trees as the sun set over the mountains in Mexico. 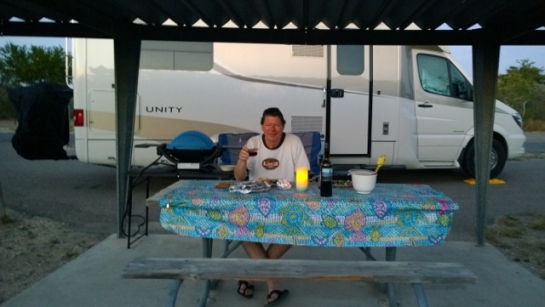 The next morning some volunteers were hosting a Bird Watching walk so we joined in with all the other Canadians and people from Wisconsin. We borrowed some binoculars so we could see the birds much clearer. We saw Northern Cardinals, Pyrrhuloxia, Black and Red Vultures, Green Jays, Verdin, Road Runners (beep beep), Laughing Gulls, Osprey, White Pelicans, Olive Sparrows, Double Crested Cormorants, and even some Collared Peccary wild hogs (also called Javelina), two rabbits and one white tailed deer. The hosts were incredibly knowledgeable about bird calls, beak and tail patterns, and habits. In the afternoon we went for an MTB ride on all the trails in the park where we saw about a half dozen Javelinas, Mesquite trees, Thorny bushes (good thing the trail was wide), and several cactus that had started to bloom due to the heat wave underway. Check out time was 2 pm so on the day we were leaving Falcon SP we did another ride around the trails and visited the incredibly steep boat ramp where lots of fishermen had gone out, although we didn’t see them on the lake. Later we realized the lake was about 40 kms long so lots of spots to go fishing. The Hydro Electric dam (built from 1950-1954) containing the lake was also an International Bridge to Mexico so the warning sign by the boat ramp was interesting. 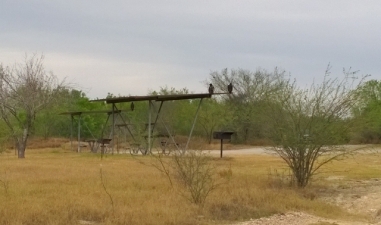 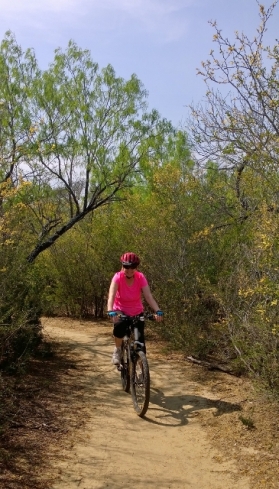 Our next stop was another 1.5 hours NW along the border in Laredo Texas and was called Lake Casa Blanca International State Park. We had a little mess to clean up when we got setup because our Kitchen tap somehow was in the on position and position over the counter, not over the sink. When we connected the outside water line the water was flowing across the counter and in to the electric box area, luckily nothing was damaged and as a bonus, the floor got cleaned. We had a quick walk around the campground and again it was like a scene from the Hitchcock movie The Birds with the Crackles waiting around to attack. We just got back to the campsite before the heavier rain began. Saturday was our first complete washout day with rain the whole day so we did the blog and didn’t get too many photos of this SP.

Lake Casa Blanca and the Crackles

Our next stop will be  a longer drive NW to Seminole Canyon SP for 4 nights.

P.S. A quick update to this blog. The rain finally let up for about 30 minutes so Sharon decided we should go for a walk around the park. We saw an old museum (no longer used), a view of the campground and Lake Casa Blanca (our rig is in the top left hand corner), a prickly cactus, an old water storage area where they used the surrounding hills to hold the water, 3 white tailed deer and a rabbit, and lastly you’ll see we were too early to walk the muddy trails after the all-day rain (note my shoes!). 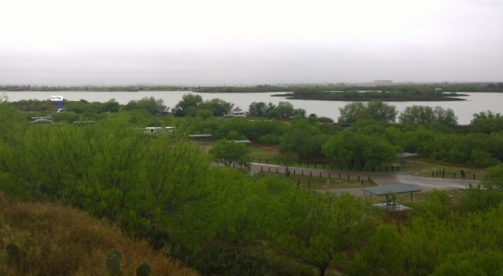 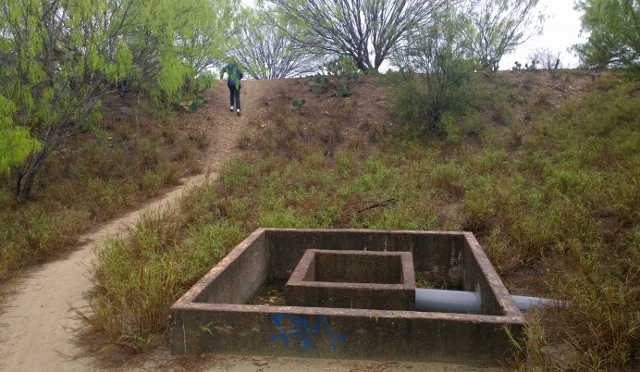 2 lbs of mud per shoe