When we left Guadalupe Mountains NP we still had some high winds in effect but not as bad as the day before. We travelled down the mountains past El Capitan and past the salt flats in the basin below. We were headed for El Paso but before we got there we turned off to see if we could get a campsite at Hueco Tanks SP (pronounced Wayco Tanks) and luckily they had availability so we checked in for two nights and had a beautiful secluded site. This park is famous for its rock art and also for its rock climbing, listed as one of the top three places in the world to do bouldering (climbing without ropes or chocks, just rock holds and a foam pad below to fall on if needed). As you will see in the photos there are lots of rocks to do bouldering on and we did see lots of climbers over the two day stay. In order to enter the park you had to watch a video on the preservation of the rock art and on the safety of bouldering. Once you had watched the video they gave you an entrance card and went over additional information about the park. They limit the number of people to go to each area in the park each day so you had to check in to go to different locations. After we had setup camp we decided to walk back to the North Mountain and visit Cave Kiva. We had to get the map from the office to find the rock art and they only allowed 5 maps out at a time (we were 1 of 5 on Friday afternoon). The description explained to go to picnic site 10, head up the rock face to the Duck rock, and continue up the ledge until parallel with the Alligator head and once at the head, cross the creek bed and crawl under the rock opening. The mystery to find the rock art was fun but once inside we were blown away by how preserved the Jornada Mogollon pictograph masks were from over 1000 years ago. We had seen lots of other pictographs but none in the mask style and with multiple colours. The underside of the rocks and the limited access helped to preserve these beautiful specimens and it is the largest grouping of masks in North America. There were 8 masks in total in Cave Kiva but there are actually over 200 in the park, many in restricted areas. Enjoy the photos below.

We got to experience this 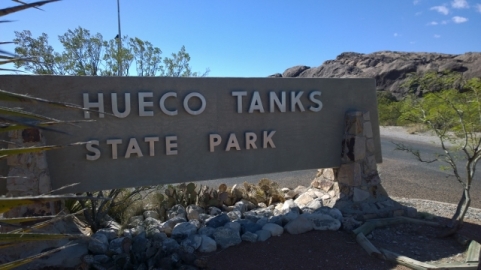 Our campsite at Hueco Tanks 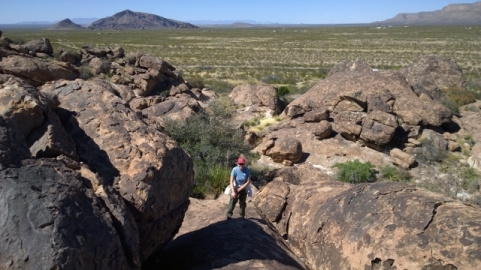 View of the small pond on North Mountain 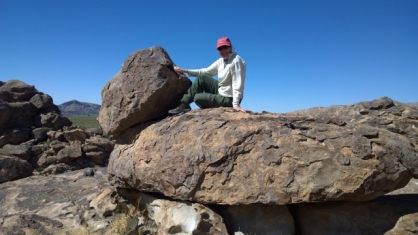 Sharon sits on another duck;-) 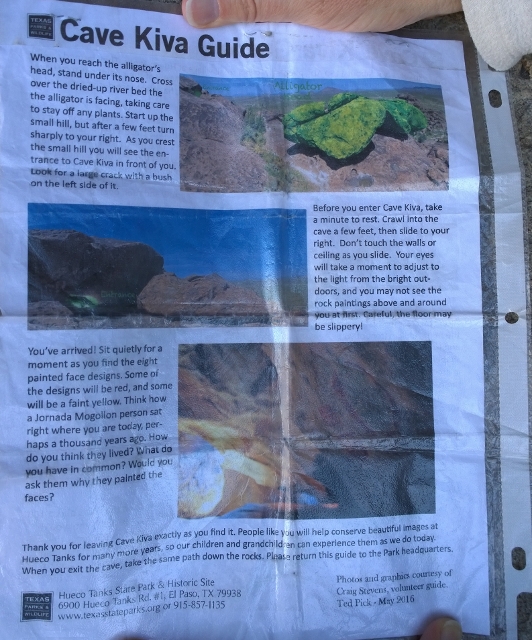 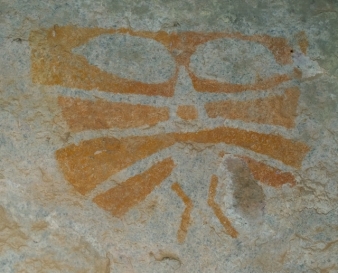 After we finished Cave Kiva we decided to explore the top of North Mountain as the ranger indicated we could just wander and work our way back around to the chains that helped you get back to the parking lot. Along the way we saw several Huecos, hollows and fracture patterns in the granite that direct and contain the precious rainfall. This is really the primary reason why these rocks were important to the natives and to the Butterfield Overland Mail route. As an interesting side note they told us in the video not to walk through the Huecos as a type of translucent shrimp called Fairy Shrimp lay their eggs in the Huecos and they can lay dormant for up to 35 years until the water returns and then they hatch, if you walked through you could crush the eggs. The top elevation of the North Mountain was 4800’ and with a bit of mini bouldering I was able to get very close to the top. Eventually we were able to work our way back around the mountain to where the chains were and saw lots of people bouldering on that side. Once we made it down the chain guide we read about the history of the area by the visitor centre. Then back at the campsite we had a spectacular reverse sunset on the rocks within view of the campsite. 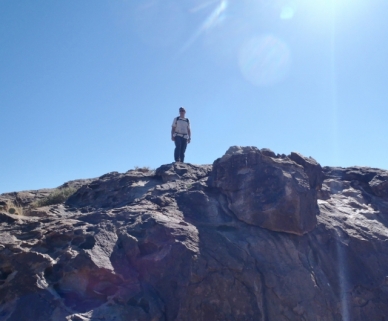 View from top of North Mountain

Hueco with no water

Chain back down North Mountain

On Saturday morning we rode our bikes over to the visitor centre so we could go on the guided ranger walk through some of the restricted areas of the park and specifically to the East Mountain (it was called Rock Art 1 tour but they have several others as well). We were lucky they were holding the tour as someone had called in to book it otherwise it would not be done. We had 22 people who were there that day so the normal 2.5 to 3 hour tour took just over 4 hours to complete (we were starving by the time it was done as it started at 10:30 and we hadn’t brought any food along with us). The Ranger Ted was an amazing story teller and he liked to give us gruesome facts as we went along. For example did you know that Turkey Vultures can vomit with precision up to 20’ away to scare off predators! Also they will catch grasshoppers and skewer them on cactus thorns so they can come back and eat them later! He was also incredibly knowledgeable about the rock art scenes we saw and this is part of the reason the tour took over 4 hours to complete. As we got to the Eastern Mountains Ted had to explain to us how to climb the boulders to get over the dam, to the pictographs, and to the ringing rock so this took time with a large group. In the last rock art location he told us the story of how the Apache women completed the right of passage in to womanhood and about the Mescalero Apache Mountain Gods saving the blind and lame men and literally this story brought chills to your body and tears to your eyes. Then to finish off the tour he let anyone who wanted to do it slide down the rocks as one of the pictographs portrayed. Ted explained this was the last step in the native passage into womanhood, so Sharon successfully slid into womanhood;-) 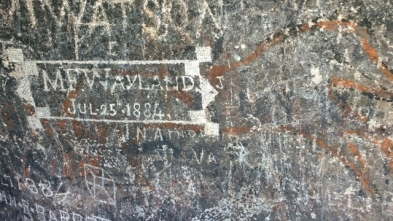 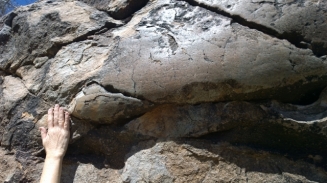 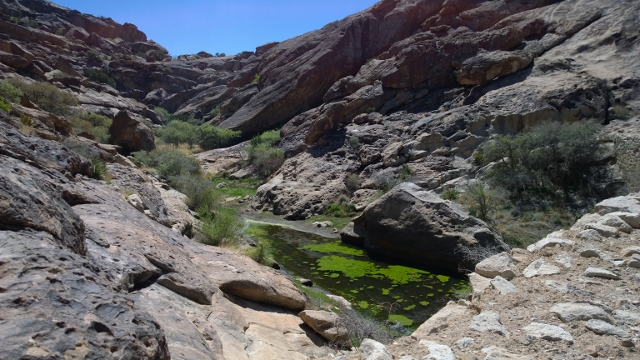 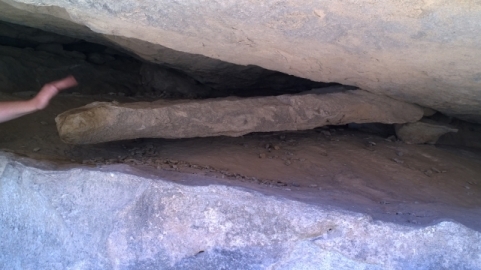 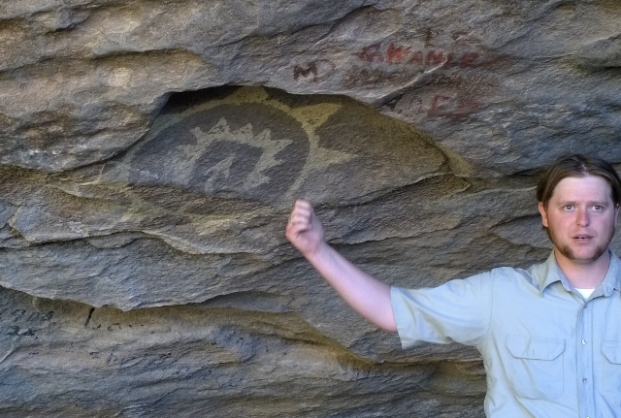 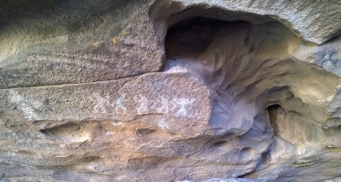 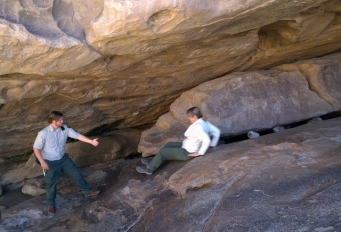 After the guided walk we returned to the RV for a late lunch, did a little blogging, and then rode our bikes back around the North Mountain to see the small lake and some more rock art. We had great colours on the rocks as it was getting later in the day. They kick everyone out of the mountain area at 6 pm so the ranger was driving around honking his horn to make sure everybody was out. We just got back to the campsite at 5:55. This State Park was definitely worth the stop! Next up is New Mexico. 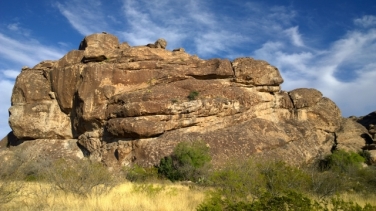