On our third major RV trip we plan to visit more of Southern New Mexico, Southern Arizona and parts of California but as usual for us we are letting the road take us where it may (just like Plankton do). It can be challenging at times booking nothing in advance but on the other hand it means you can stay as long as you like and explore much more thoroughly. We named our RV “Plankton” and it left its pelagic zone on November 24th. Our first stop was in Woodstock Ontario to visit my brother Dwight and his family Petra, Heather and Jill (and of course the cat Data and the dog Kobe). On the first night we saw a beautiful sunset over Pittock Lake right behind their house and then went out for a great dinner at an English pub. 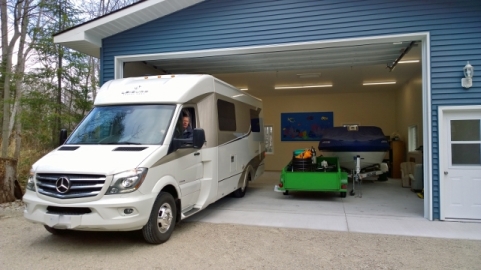 Plankton leaving for a 5 month Adventure 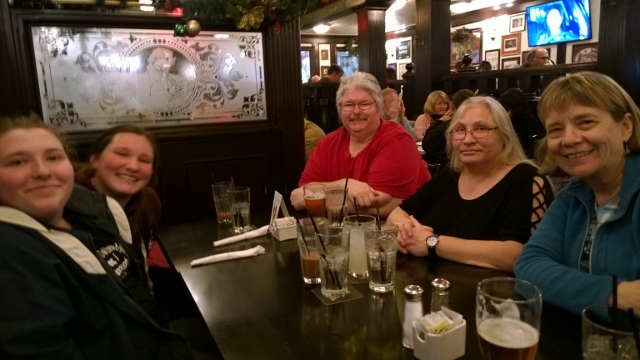 The next day in Woodstock our nieces got to open their birthday presents early (with Kobe checking out all the action) since we won’t be around for their actual birthdays. Later that day we went shopping and they decided to buy some cute onesies;-) 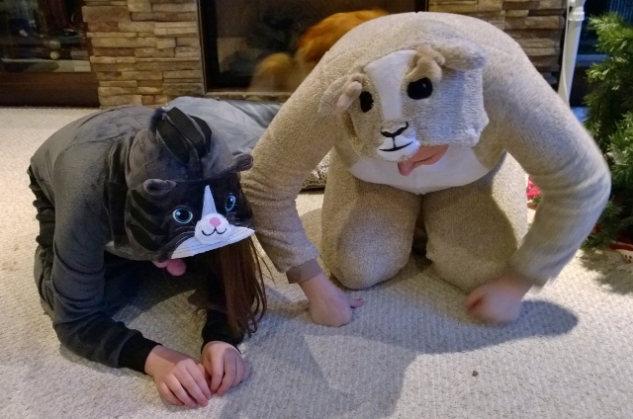 The next day we drove to London Ontario to visit our friends Ron and Kelly in their newly renovated century old home. It was great to catch up with them and see what an amazing job they had done with the complete home renovation. We went out that night for an Italian dinner and then had a huge breakfast the next morning at a great little diner before starting our journey to the cross the border. 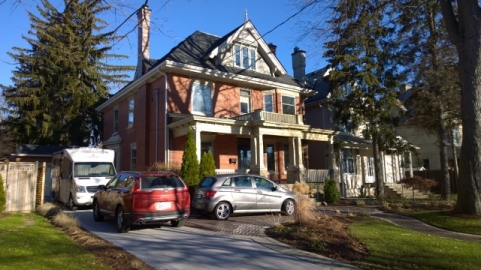 We crossed in to the US at Port Huron but the wait time was extremely long at almost 55 minutes. At least the border agent was funny because when we said we were heading to New Mexico he wanted to know if we were going to the town named Truth or Consequences;-) We mentioned Bob Barker but we don’t think he was old enough to know who he was! We found a State Park in Indiana but when we got there it was closed for campers because it was full of hunters. We then headed to an RV park near Huntington but unfortunately when we got there the bathroom facilities had been closed down for the season so instead we went to a Super 8 for the night. The next day we headed for St. Louis and checked in at the campground in the downtown area.

The next day we spent walking around in downtown St. Louis with of course the main destination being the famous Arch. Our first stop though was the downtown Citygarden where we saw many interesting pieces of art. It’s in the eyes of the beholder;-) 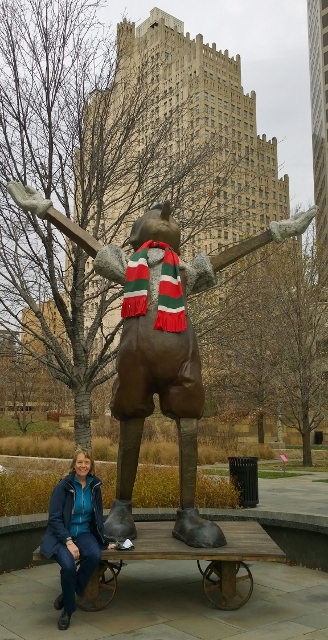 In the City Hall building we bought our US National Park pass for another year and then bought tickets to take the Tram to the top of the Arch and to take the Mississippi River Boat cruise. The Arch is 630’ (192 Metres) or 63 stories tall and is the single largest stainless steel structure in the world. The tram cars take 4 minutes to reach the top and 3 minutes to get back down and each car can hold 5 people (8 cars for 40 total people per trip). They had it closed for maintenance when we went through St. Louis in April so we wanted to stop this time by. At the top the structure is only 17’ across and you basically lie down on a slope to see out the windows. As you’ll see from the photos, the view is spectacular of the downtown area, the river, the home of the St. Louis Cardinals (Busch Stadium), and really cool looking straight down to the base of the Arch. 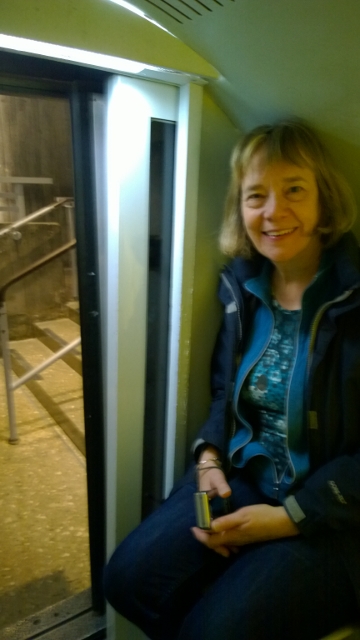 Tram up the Arch 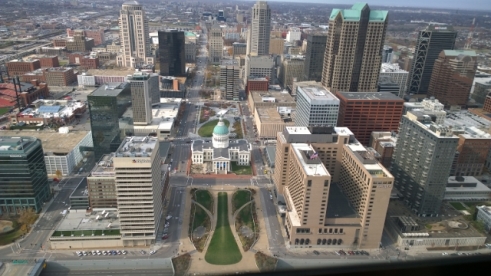 View of the base!

View of both bases!

After we visited the top we went back to the base and watched the documentary on how the arch was built and it was really fascinating. What the Iron Workers and Engineers did to construct the arch was incredible. Cranes were used part way up but once the crane limits were reached they constructed a steelwork frame on the outer edge and a movable crane went up that frame to continue to build to the top. Also it was interesting because the designer was Finnish, Eero Saarinen, and he was also the designer for the famous Tulip Chair and Table! 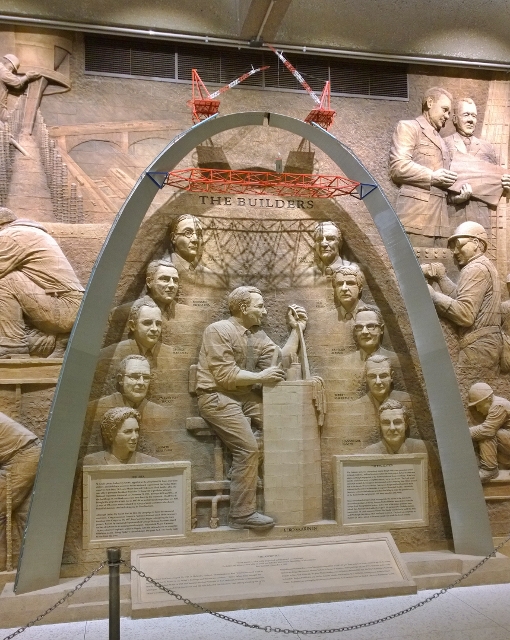 Next was the Mississippi River cruise on a paddle wheel boat and the tour explained all about the industrial boat traffic along the river. The river boats could push up to 16 containers and they could contain, sand, cement mix, and grains and they can go upstream from St. Louis through a series of locks. 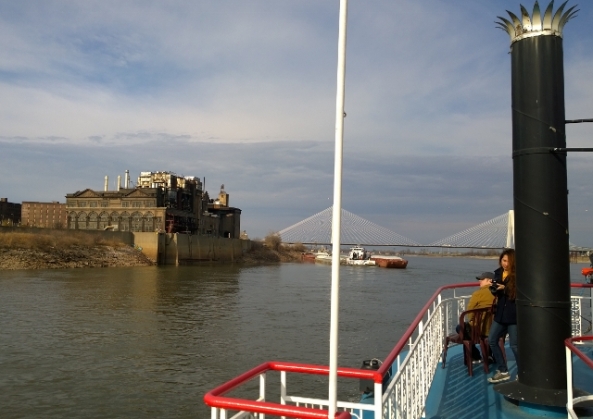 Arch with Dredge Barge in front

After the boat cruise we walked by the ballpark and went to the Broadway Oyster Bar (part of it built in 1843) where we had an amazing meal which consisted of Oysters, 2 different Stout Beers, an Alligator Cheesecake Appetizer, and I had Blackened Salmon while Sharon had a Cajun/Creole Sampler platter complete with Gumbo, WOW! It was a good thing we were walking back to the campground;-)

The next day we drove to Springfield Missouri and visited the Bass Pro Shop main location where they had a museum showing what the very first store display looked like inside Johnny Morris’s fathers liquor store. The outside shot of the current location only showed half of the current facility! We continued on to Branson and found a good campground close to the show area. Unfortunately for me that’s when my flu set in and I spent the next 36 hours in bed! Sharon toured around the main street and went to a 50s musical show called Hot Rods and High Heels. Sharon became part of the show when one of the entertainers came down the aisle and sat beside her and sang a ballad to her!

Since there was a cold front coming down from Canada we decided to head South West to Lake Thunderbird State Park south of Oklahoma City and arrived for a very nice sunset. The following day we headed south in to Texas and went to Lake Arrowhead State Park and the day time temperature was 27C! The Prairie Dogs were our welcome group at the campsite;-)

Bass Pro Shops (only half) 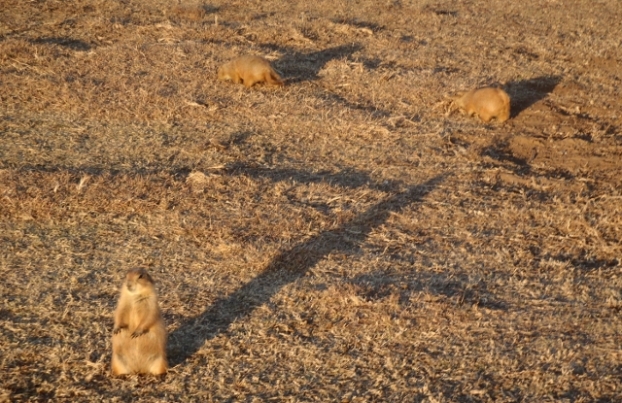 That concludes our first blog for this next 5 month adventure. If you are regular follower of the blog let me know what you like best about our blog and let me know if there are any changes you would like to see? Hope you enjoy reading it as much as we enjoy putting it together;-)