We figured grocery prices would start to get steeper so we did a large (too large) stock up at the Supercentre in Whitehorse. We should have stocked up on wine as we ended up going 10 days without any! We didn’t go too far this day as we stopped at Lake Laberge (famous from the Cremation of Sam McGee poem) to camp for the night. All the Territorial Parks have free firewood so we attempted to have a campfire. However, the wood was wet from rain and we really didn’t have proper kindling, so we just made a smoke fest which was great for keeping the mosquitoes away😉 Later a red fox came right into our campsite to see if we left any food lying around. 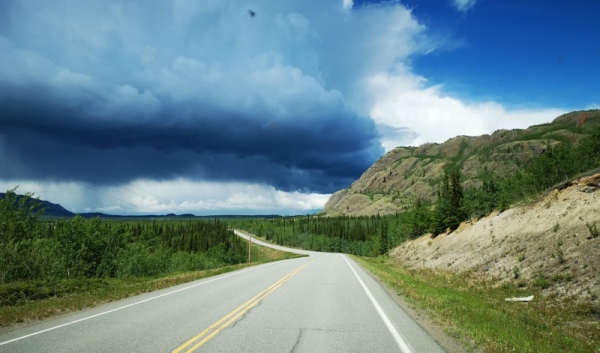 Scary weather on the way to Lake Laberge

Did you guys leave me anything?

Our Milepost book gives us information on things to stop and see so we stopped at the Fox Lake Fire site that happened in 1998. It’s amazing how long it takes for things to recover and it was also interesting to see how many fires start from lightning versus from human causes.

Fire over 20 years before 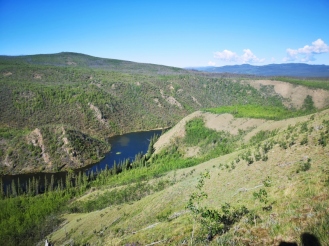 The 3rd of our Cinnamon Bun stops was at Braeburn Lodge and it was humungous!!! Luckily, she said to us that she could cut it in half and heat up the one half for us to eat and wrap the other half for us to take away.

Back in the early 1900’s there was a winter route from Whitehorse to Dawson City (530 km) that was used to transport mail, gold and freight so there were a series of roadhouses, every 30 miles or so, for rest stops. The Montague Roadhouse historic site was one of our stops. 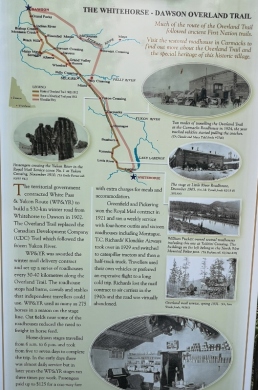 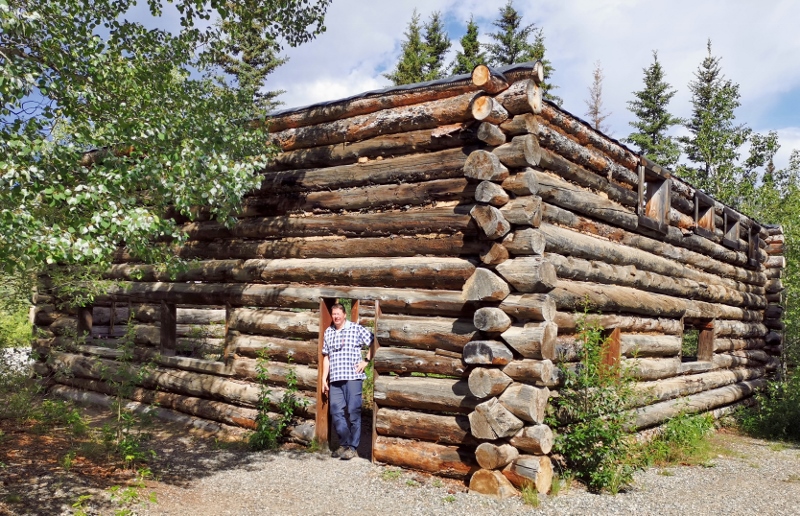 In Carmacks we stopped to do the historic boardwalk along the river with various old buildings. We saw the Orloff King prospector Cabin, some of the coal buckets from the coal mine time period, and the Carmacks Roadhouse (built in 1903 with 12 rooms and a sod roof) and stables (even the horses needed to rest). 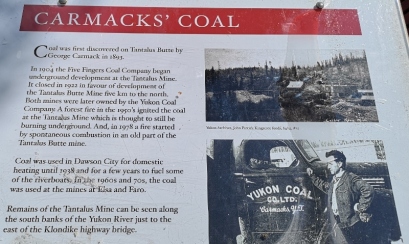 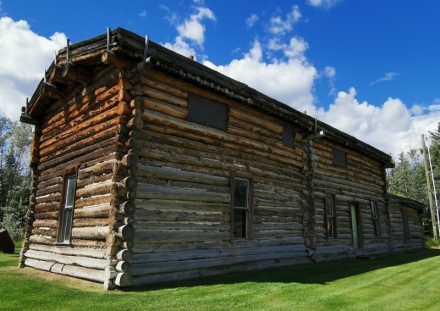 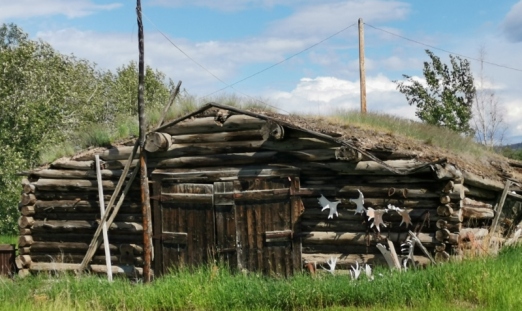 One of the stops (our 13th) on the Yukon Adventure Passport was the Little Salmon/Carmacks First Nation Interpretative Centre. The host told us they did not have written display boards and instead preferred to give verbal stories about the displays as they pass knowledge through storytelling.  We asked her questions about most of the displays as she walked around the centre with us. We were lucky as no one else came in while we were there so it was like a private tour. It was quite fascinating hearing about how they made the large snowshoes. the unique style each artist had when doing bead work on moccasins, how they used moose legs as runners to slide things across the snow (the fur allowed sliding one direction and acted as friction the other way), and about what the young girls went through to become women and be ready to marry. After we walked the trail behind the centre, but it hadn’t really been prepared for the season yet. 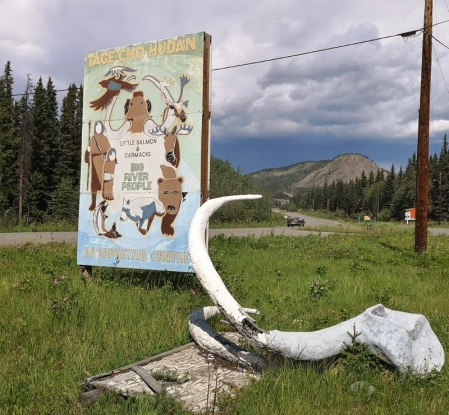 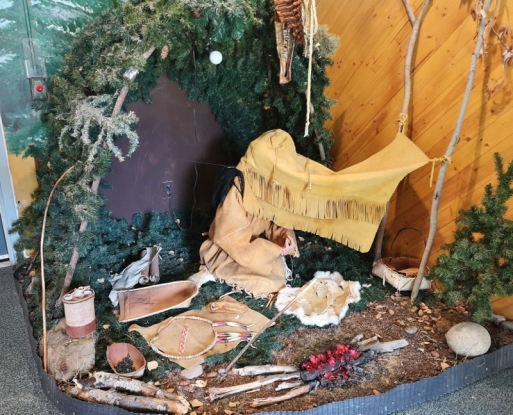 Girl turning to a Woman, the hat was to make her focus and concentrate.

Five Finger Rapids along the Yukon River was one of the most difficult sections for the 1898 Klondike Stampeders and later the sternwheelers to navigate. Eventually they blasted out some rock in order to avoid the 30-60 cm drop and they also installed a cable that could be used to winch them through the rapids. The view platform along the highway was 2 kms and 219 steps from the lower viewpoint and when we arrived there was a whole tour bus full of people at the upper deck. Only us and another couple with their baby decided to do the full hike down and back and we got really lucky as by the time we reached the lower deck the sun was out and the view was spectacular! We stayed at Tachun Creek Government Park that evening and got a pretty spot right by the creek. 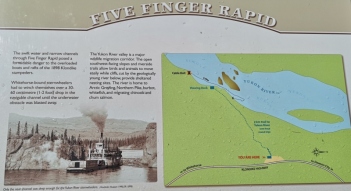 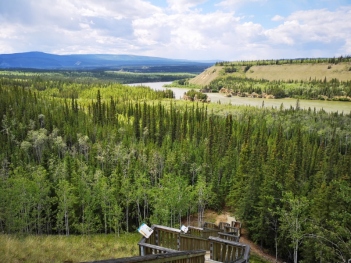 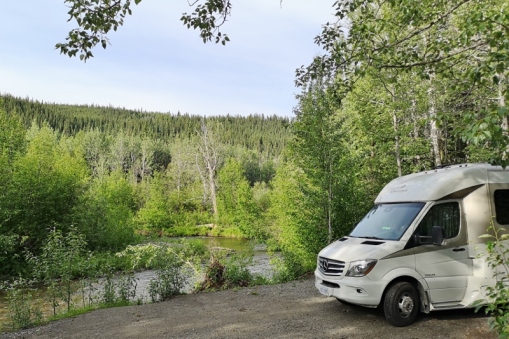 Passport stop #14 was the Big Jonathon House Heritage Centre for the Selkirk First Nation in Pelly Crossing. Again, the host was very helpful explaining about the exhibits. The most interesting items were the antlers with carvings in them as we had not seen that in any of the other First Nation Heritage Centres. 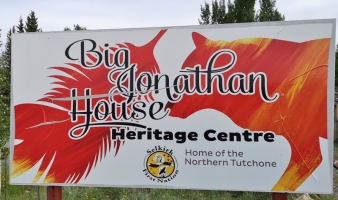 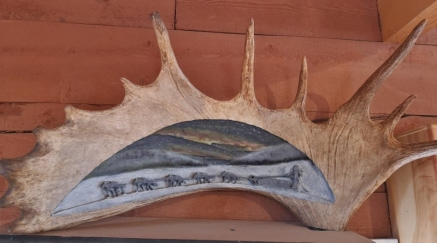 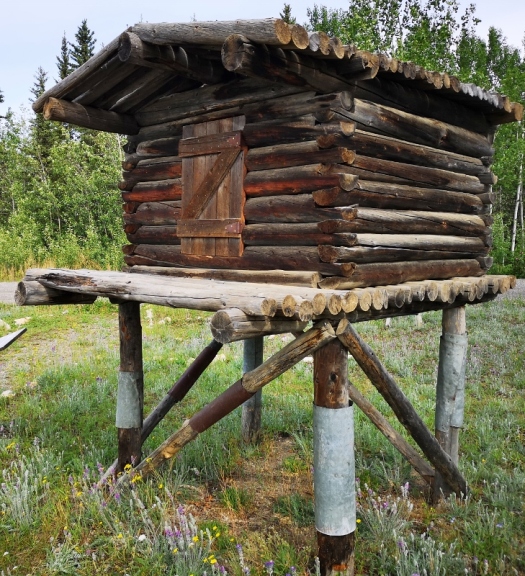 We took a side trip to do the Silver Trail to learn a bit more about the Yukon’s mining history. It started with gold in 1898 and then a rich vein of silver in 1903. Silver was hauled out of the area by horses in the winter and small sternwheelers down the Stewart River until 1950 when the Silver Trail Road was opened all the way through to Keno.  We stopped at Devil’s Elbow to do a short hike to view the wetlands and see if we could see any moose in their calving area (we didn’t).  The first village was Mayo (stop #15) established in 1903 to service the growing number of prospectors coming to the area, however it prospered in 1919 when a big silver deposit was discovered at Keno Hill.  We looked around town a bit before heading on the dirt road to Keno City. Part way along the road we tried to do the loop along Duncan Creek Road but soon realized it wasn’t very good so returned to the main dirt road.

Keno City boomed in the 1920s due to the silver mining.  All the mines are now closed but there are still a few “old-timers” and miners hoping to strike it rich. There was an excellent Mining Museum with artifacts and history on the old mining days.  I think some of the old-timers sitting on the front porch added to the museums charm. There are only 20 people left living in Keno and it was their labour of love that brought Jackson Hall back to be the current Mining Museum. 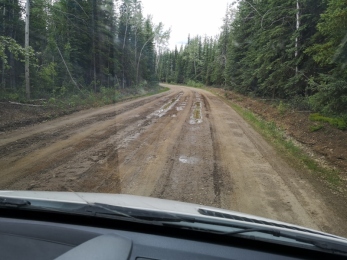 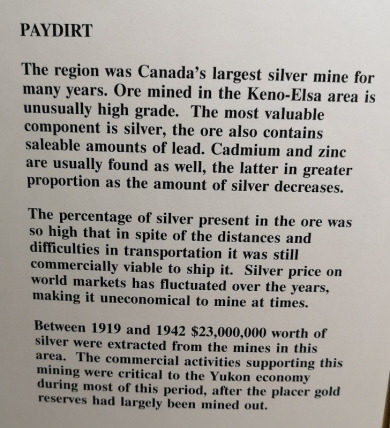 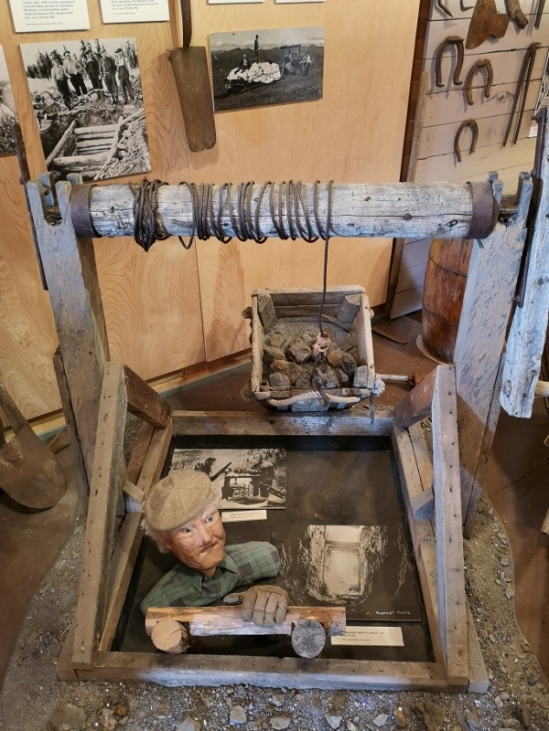 Miner down the shaft 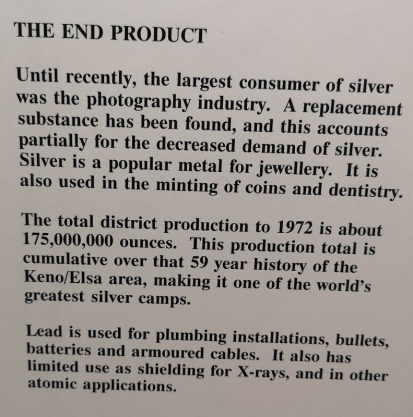 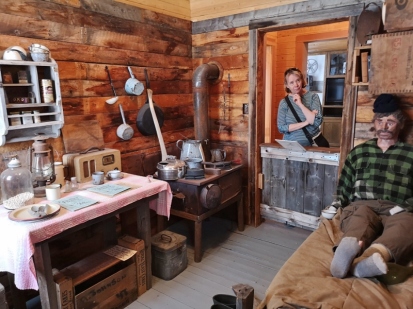 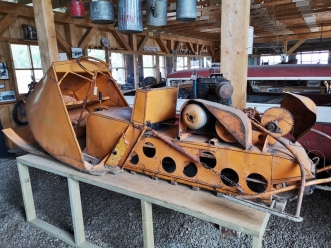 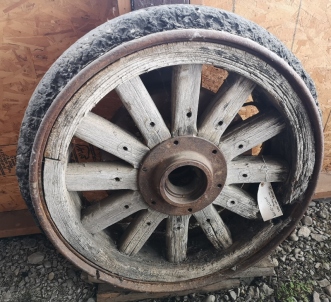 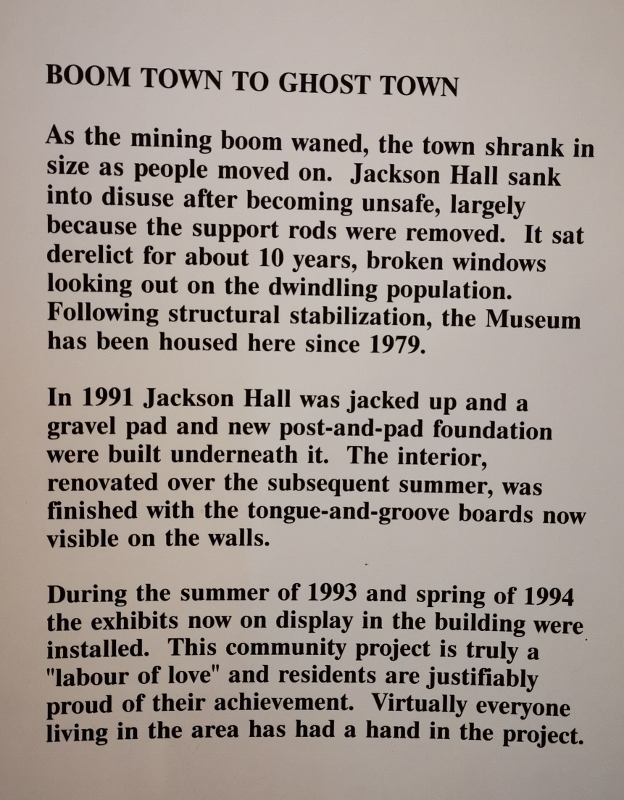 We set up for the night at the community campground and then did a walking tour to see some of the historic buildings.  By far the most interesting building was the Beer Bottle House!!  The hotel owner couldn’t recycle the beer bottles back in the early 1960’s so he decided to give his house some added insulation.  Four years and 32,000 “stubbys” later he was done his work. 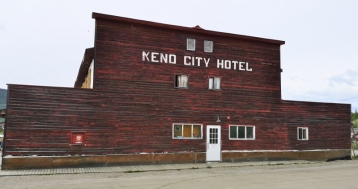 Hotel 1920 – Bar much bigger than the church 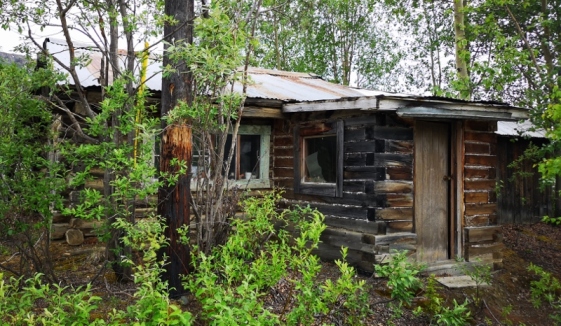 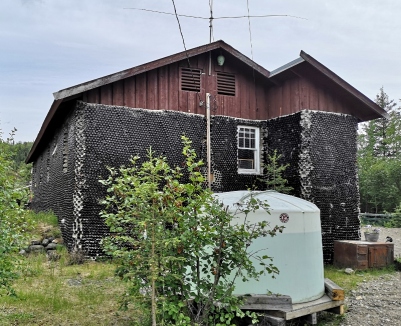 We were told there would be a concert at 8pm in the old hotel and we were welcome to come.   Turns out it was the Keno City Music, Air and Literature Workshop participants who were having a weeklong workshop and retreat in Keno.  When we arrived, they told us we should go across the street to the bar if we’d like to pick up something to drink.  Well, that sounded like a good idea… No one is in the bar, a current miner comes in (later he was a musician on stage) and said “you want something easy?”  I guess it wasn’t “easy” to do so he got the owner, definitely an “old-timer”, to help us out.  They had a sign-up sheet and anyone could go on stage and perform.  One lady read her short story the rest was music by some very passionate people.  They had 50/50 tickets, we didn’t win the $37 ☹ (it was a small retreat) but we did win KenoSkully!!  Skully will now continue on our journey with us. 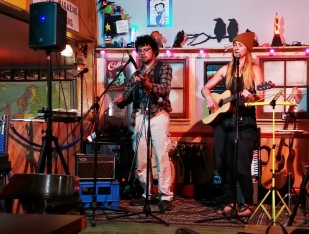 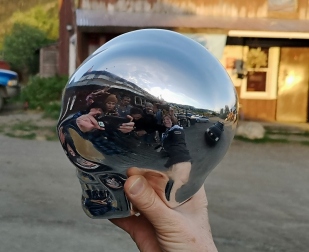 We headed out early the next morning as it was going to rain and we didn’t want to be driving on a slippery dirt road down the mountain. Our main stop on this day was Moose Creek Lodge north of Stewart Crossing. We met a couple from PEI who had a 2002 LTV Freedom and they had just been to Inuvik and Tuktoyaktuk so we had a good chat with them on the Dempster Highway road conditions since we were going there next. We got an RV park with Internet access that night so we could post our latest blogs and start the Dempster the following day and that will be the next blog.

The Mosquitoes are really big up here!