Crooked River SP is on the edge of the Crooked River that flows about 27 miles inland from the southern terminus of Georgia’s 100-mile coastline. It is more a tidal creek than a river as it is fed from the rise and fall of the tides from the Intercoastal Cumberland River. The incoming tides bring nourishment to the marsh and the outgoing tides transport organic matter that is beneficial to the organisms in the sea.  Georgia has approximately 350,000 acres of salt marshes, one of the most extensive marshland areas in the United States. These marshes are productive with a food energy yield of approximately 20 tons per acre which is about 4 times what a cultivated field of corn yields.

The campground had very large sites and also a grouping of cabins that could be rented. This was another park where we had to move sites in the middle of our stay as we could only get 2 nights in one site and 2 nights in a different site.  On our first full day in the park we did an MTB ride (8 kms) on the River Trail, the Nature Trail, part of the Sempervirens trail, the Palmetto trail and what turned out to be a closed section of the Bay Boardwalk trail (they only had a closed sign part way through). We stopped in the Interpretative Centre and the ranger gave us a custom tour of the alligator, turtles and snakes in their aquariums. In the afternoon we enjoyed the 70 F sunshine day by our campsite. 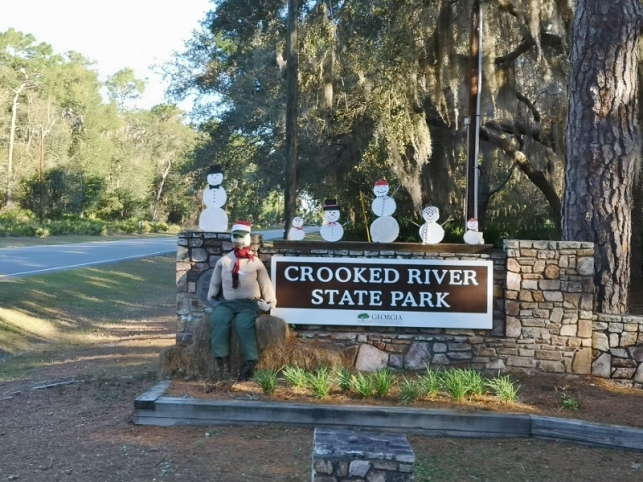 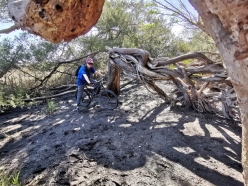 It gets a little muddy along the nature trail

Interesting tree over the Palmeto Trail

Alligator in the Interpretative Centre

The day before the ranger had told us where we might find an alligator in a pond by the bird blind and gopher tortoises near the cabins, so the next day we ventured out on our bikes again (6 kms) to see if we could find them.  We were fortunate to see both, especially the tortoise as they usually aren’t out in the open. The Gopher Tortoise is land based and herbivorous feeding on grasses, herbs, fruits and berries for many hours each day in sandy areas. Before heading back to the campground, we decided to play mini golf ($4 for the putter and ball). Sharon won the first round getting 2 holes-in-one and I won the second round and the overall total score. It was an old course and a couple of the holes were quite tricky.

Alligator near the bird blind

Same Alligator now out of the water

Gopher Tortoise returns to his burrow

Our campsite in Crooked River SP

On our last day at Crooked River SP we decided to walk around the park (5 kms), no alligators or tortoise today but we did see an armadillo.  Sharon finished off the day by going to the campfire BINGO with a fun crowd of other campers, Joel relaxed and stayed away from the biting gnats that seem to really like his blood since his blood thinners make it flow really well;-(

Armadillo going to hide in the bush

Strange Beetle on the RV window

Panorama of the Bird Blind pond

The next morning, we headed out early because we wanted to have as much time as possible at Fort Clinch since we could only get one night there.  We made a stop at an old sugar cane mill near Crooked River, then headed into Florida. We were too early to check into our campsite, so we headed over to tour the Fort and museum. We happened to there on the one Sunday per month where they have volunteers dressed in period Union costumes telling you about life in 1864. Construction began on the Fort in 1847 and it is located on the northern tip of Amelia Island in order to protect Cumberland Sound. There were three systems of forts in this time period.

Fort Clinch was a Third System pentagon shape with 4.5’ thick masonry external walls that were 26’ high with casemated bastions in each corner. Cannons were mounted on the top but they were also within the walls for a multi tier attack mechanism. The outer masonry walls (scarps) were separated from the inner soil embankments (ramparts). Fort Clinch was one of only two forts built in this manner. Union forces had begun the construction of Fort Clinch but when Florida withdrew from the Union in 1861 the Confederate forces took over the fort in April of 1861 even though it was far from being completed. Due to a shortage of men General Robert E. Lee ordered the abandonment of Fort Clinch. Union forces actually retook Fort Clinch in March of 1862 and they completed the construction. After the Civil War Fort Clinch was abandoned in 1869 and it wasn’t until the Spanish-American war in 1898 that a garrison reoccupied the Fort. The Fort didn’t see any major action and consequently is in amazing condition and now as part of the State Park.

We started off with a walking tour of the buildings on the inside of the fort and would circle back to the solider volunteers as we had questions about the fort and life in that time period. After that we followed the corridor to one of the bastions and climbed the spiral staircase to the top for the views. We followed the gaps between the outer walls and the earthen ramparts to get to each of the 5 bastions and found it interesting that they all had slightly different designs. The north and east walls faced over Cumberland Sound and the beach and the south wall where the entrance was had a drawbridge and moat. It was interesting learning from the volunteers the drudgery of day to day life in the Fort. 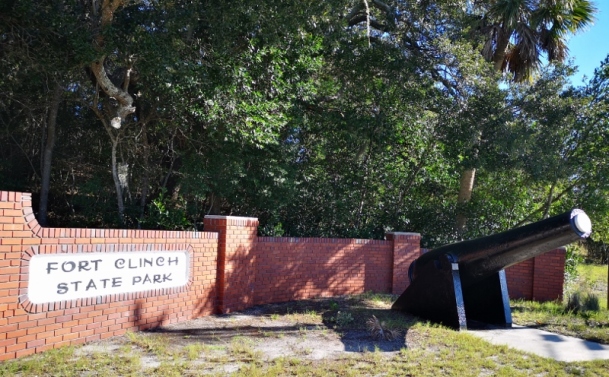 Moat around the south entrance

Inside Soliders Barracks – also where they ate 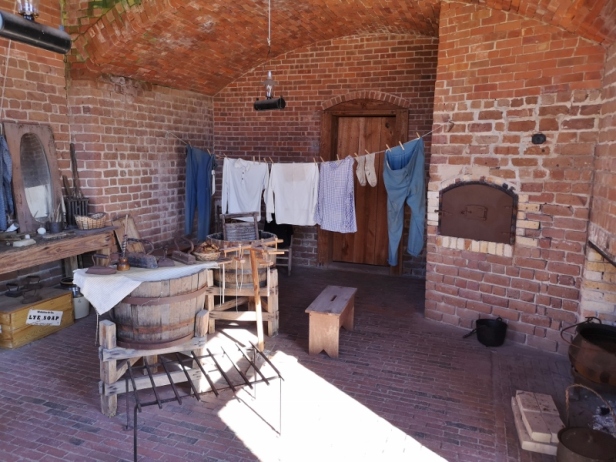 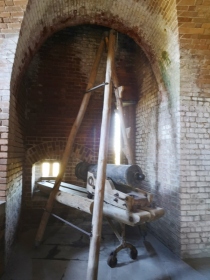 Looking north from top of bastion 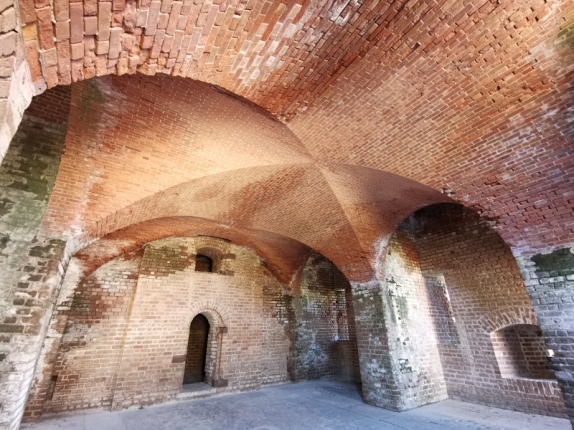 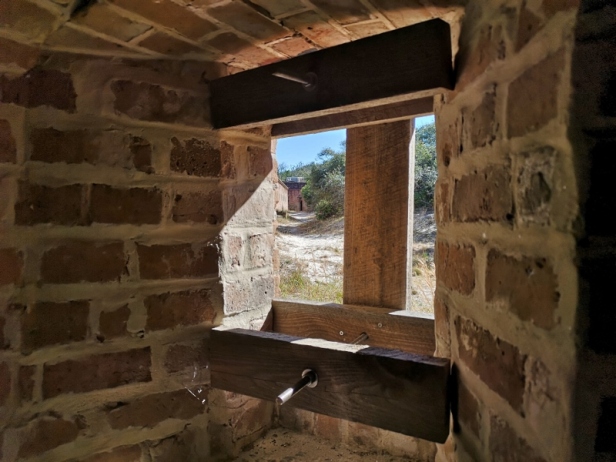 Sharon’s shadow in an archway surrounded by an Angel!

After viewing the Fort we did a beach walk before checking into our campsite.  Once settled in, it was back to the beach in our quest to find more sharks teeth.  We found a few more and were surprised at the number of jellyfish washed up on the beach. We didn’t have to check out until 1 pm the following day so Sharon took it as an opportunity to walk the beach again hunting for teeth and I did a really fun 11 km loop MTB trail that paralleled both sides of the entry road. I saw a white-tailed deer cross the trail and a crazy squirrel bolted right in front of me while riding which made me hit a tree to avoid him! We really enjoyed Fort Clinch SP and we would definitely return if we could get a booking.

Shark Teeth hunting on the beach in front of Fort Clinch 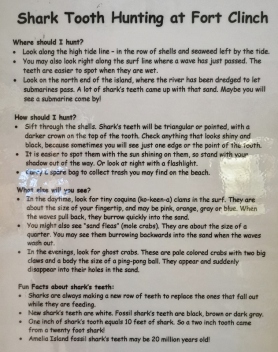 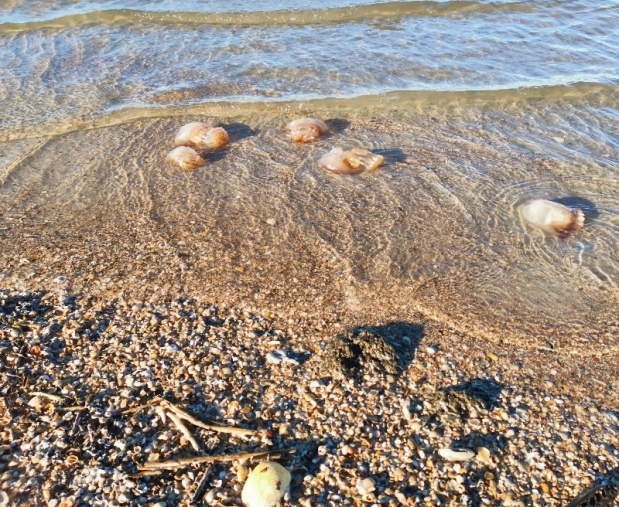 Jellyfish washed up on shore

Next blog will be back in Georgia and cover the Okefenokee Swamp.