Ginnie Springs is a private park and they charge $12 per day per person for entrance on top of the camping fee so it was no problem at all in getting a camping spot for 3 nights. We were really glad we arrived on a Thursday because the 5 springs were all pretty much empty on Thursday and most of Friday. By Saturday the main two springs Ginnie and Devil were absolutely packed with weekend partier’s especially since we had 73 F air temperatures with 72 F water temperatures. On the Thursday we visited all 5 springs: Deer, Twin, Dogwood, Ginnie, and Devil. We swam in all of them except Deer as it was very murky. The way this park works is that you have the tannin coloured Santa Fe River running along the boundary and then the 5 really clear freshwater springs that flow into the river. They have about 120 electric/water campsites and then they must have several hundreds for tents.

The two big activities are tubing down the Santa Fe River and Cave diving in Devils Spring. You can do regular Scuba diving in Ginnie Spring but it would be a very short dive as the cavern is not that large so it didn’t seem worth it to rent gear and pay the fee as it would have totaled $160 USD for the two of us to dive. We opted to snorkel instead, and we took the underwater camera on Friday and Saturday to get some pictures in the water. There were lots of fish in Twin Spring including a black and white catfish and at the end of Ginnie Spring I was lucky enough to see a 6’ Garfish but unfortunately the picture didn’t turn out too well as he was in the tannin coloured water of the river. We also spent a bunch of time talking to various cave divers before they went into the Devils Spring system. Two guys with rebreathers were planning for a 3-hour dive through the caves. Many of them were using motorized transporters to propel themselves through the 30,000 feet of passageways in the Devils Eye/Ear cave system. You needed Cave certification to go in that system. On Saturday afternoon the river was full of tubes, kayaks, canoes and paddle boards and on Saturday night many campsites were competing for the loudest music😉 Luckily in our area it wasn’t too bad so no trouble sleeping.

Map of the Springs 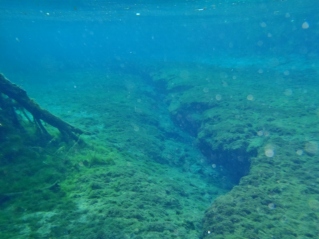 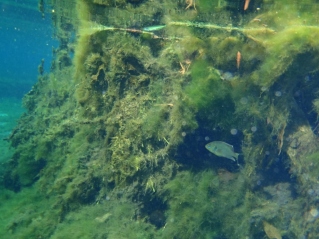 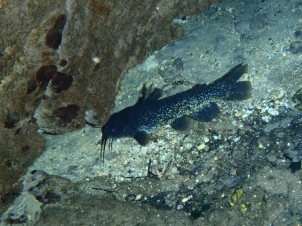 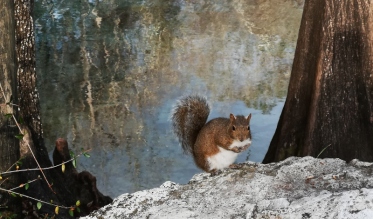 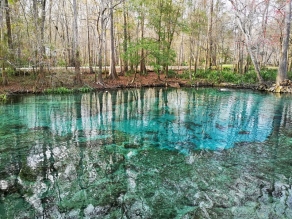 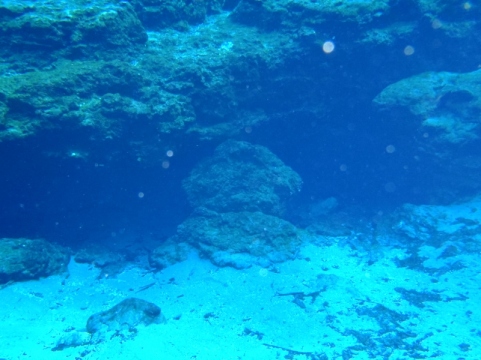 Entrance to cavern in Ginnie Spring 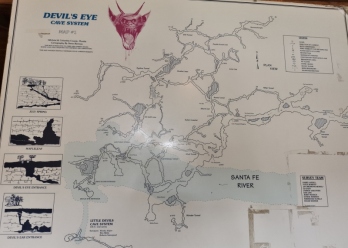 After leaving Ginnie Springs we drove west until we got to the gulf coast and then started following the coastal road. This is the first area where we have started to repeat some of what we did in RV Trip 2 in 2016/17. Also, I will make note here that based on a suggestion from Danny I have started to use a new numbering scheme for the blogs. It will start with RV Trip 6 but then I will add a point and a sequential number, so you know how many blogs have been written within this trip. So, for example this blog is the 9th blog for this trip so it is RV Trip 6.9. This will help if you are trying to catch up on blogs and want to read them in sequence. If you have other suggestions feel free to leave me your comments, I try to answer all of them depending on our internet connections.

As we drove along the gulf coast, we could start to see some of the damage done by Hurricane Michael in October of 2018. Here are some of the statistics of that hurricane:

We checked into St. George SP for a 6-night stay. We were lucky to get this booking as we happened to go online when someone had cancelled their week booking and we were able to reserve it. As we explored the island over the next several days, we could see several of the impacts of hurricane Michael even though it was 16 months ago. There were houses being rebuilt in the town of St. George. The road to the east end of the island in the SP was closed. The beach shelters were all under reconstruction and we saw one of the board walks pushed 200 m back into the sand dunes. Part of the East Slough trail was still closed. There were two shipwrecks we had seen the last time we were here and they were both gone now. They had created 4 temporary campsites for workers to live that are doing some of the shelter rebuilding. The rest of the campground was in good shape. St. George is a barrier island with some very large sand dunes, so this takes the brunt of the storm surge when a hurricane hits whereas Mexico Beach and Port St. Joe don’t have the same protection. This is why barrier islands are so important.

The first full day we did a 7 km walk along the beach in search of seashells and sand dollars. The second day we did an 18 km MTB ride along the beach to the East end of the island and back. We had planned to take the beach one direction and the road back but since the road was closed, we had to take the beach both directions. The third day we did a 19 km MTB ride on the Gap Point trail to the two primitive campsites, the overlook portion of the East Slough trail and back along the beach. The first three nights we had nighttime temperatures that were around freezing so our new electric space heater got a good workout and that also explains why you’ll see Sharon in her down jacket during the day time.  The fourth day we did another 7 km beach walk for shells and on this day the waves and the wind had uncovered lots of new sections of shells. On our fifth day we had rain until 1 pm and then did our last 9 km walk along the beach and it was warm enough that we could walk barefoot in the water😉. The campground has nice facilities including a lending library where we were able to borrow DVDs. We watched some old movies, as usual Joel saw the entire movies, Sharon only parts.

I’ve written before about the turpentine industry and we saw lots of cat face trees on the Gap Point trail, but we also learned a couple of new facts:

On our beach walks and rides we saw Great Blue Herons, Snowy Plovers, Wilson Plovers, Brown Pelicans, Willets, Great Egret, Cardinals (on the Gap trail) and of course the usual sea gulls. We also saw several different sea creatures washed up on shore with Jellyfish, Crabs, Sea Urchins, Starfish, and pieces of sponge. We really enjoyed our second stay at St. George Island SP because we’re able to do some biking and the beach is beautiful. 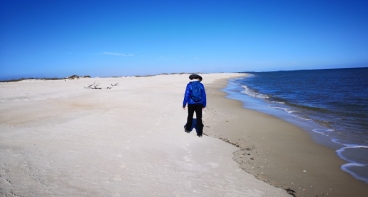 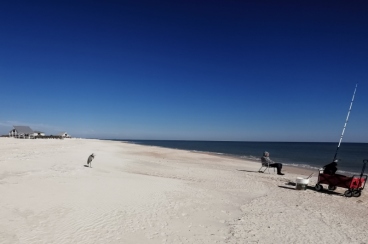 Great Blue Heron waiting for the fishermen to catch something 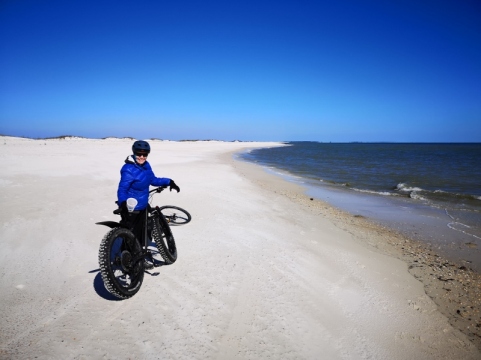 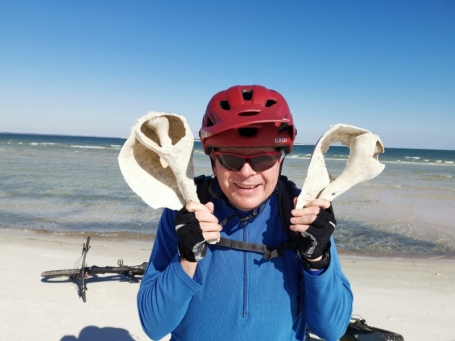 My you have big ears Joel 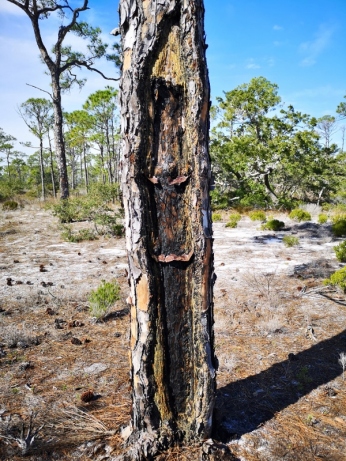 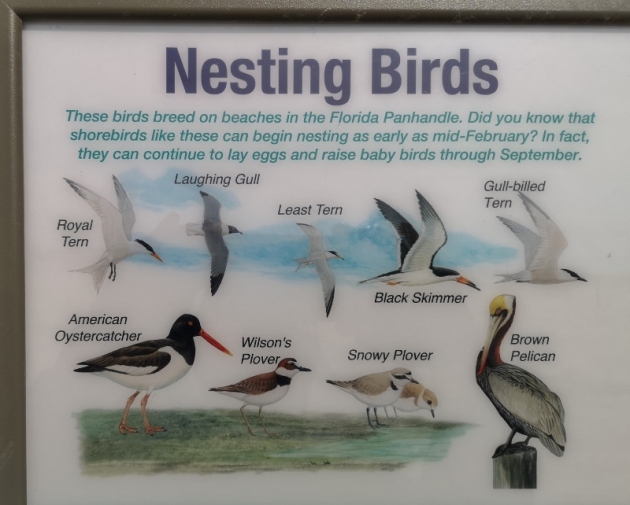 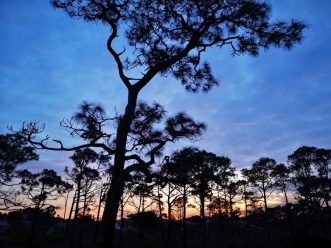 Sunset while BBQing at our campsite

It’s very hard to see but in the dunes on the left is a boardwalk that came off the shelter on the right in hurricane Michael. This section is still closed.

Our Seashell and Sand Dollar “keepers”. Very hard to find a complete dollar, we settled to fifty cents.

Finally barefoot on the beach on our last day

Alligator on left and Great Egret on right

On the day we left the SP we stopped at a seafood restaurant in St. George called the Blue Parrot and had an amazing meal sitting right on the beach. We had Baked Oysters and Conch Fritters for starters and I had a Blackened Tuna BLT with a massive piece of tuna and Sharon had Shrimp tacos which were more the size of burritos! We finished off with a homemade Key Lime pie. After lunch we did a stroll on the beach and found tons of what they call “jingle” shells. What a great way to close off our stay at St. George Island.

Margarita on the beach

Our next stops are Torreya SP and then Falling Waters SP inland on the Florida Panhandle.